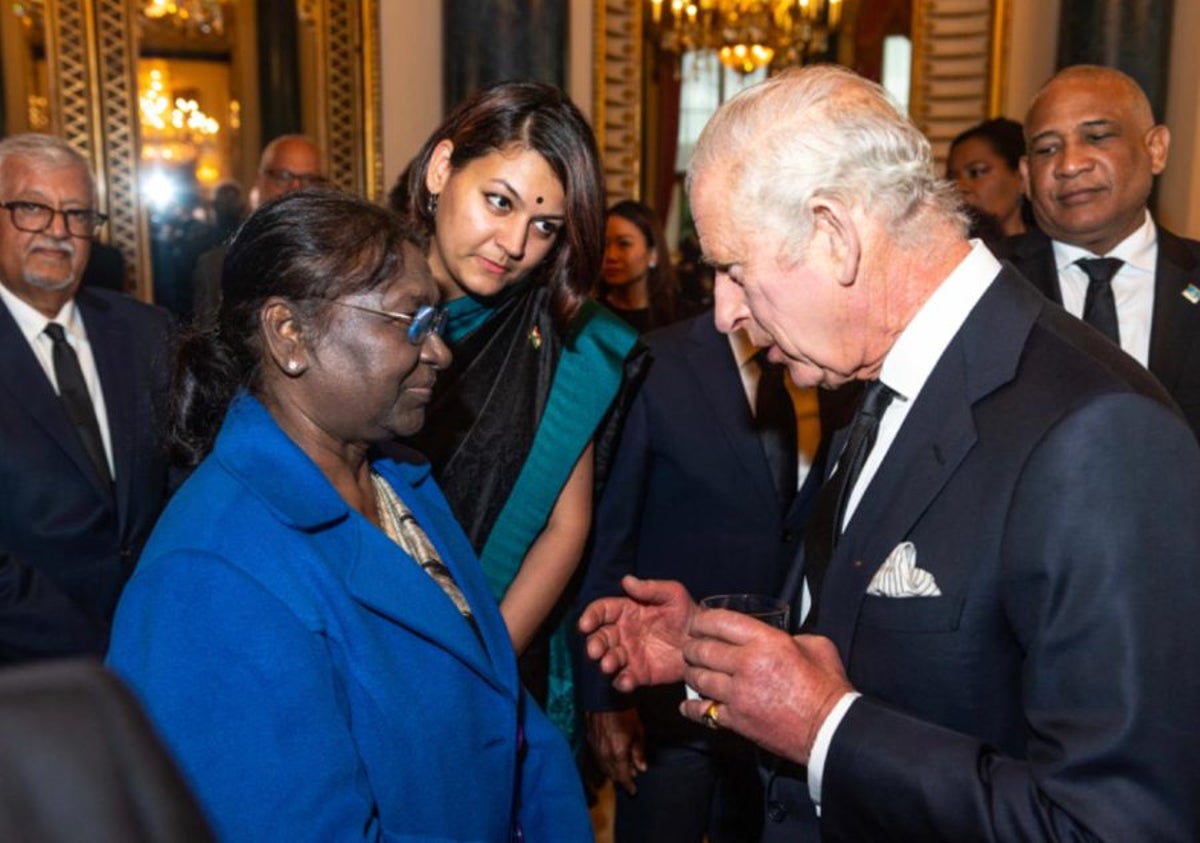 India’s president Droupadi Murmu on Sunday met King Charles at Buckingham Palace during her three-day visit to the UK to attend the funeral of Queen Elizabeth II, as prime minister Narendra Modi stayed back in New Delhi.

Ms Murmu is representing India at a series of events around the funeral that are being attended by hundreds of foreign dignitaries. The Independent previously reported that Mr Modi would not be attending as the two leaders do not typically leave the country on foreign visits at the same time.

The recently-elected president arrived late on Saturday in London to offer “condolences on behalf of the government of India”.

She paid tribute to the Queen at Westminster Hall, where the late monarch’s body was lying in state.

“The president offered tributes to the departed soul on her own behalf and on behalf of the people of India,” read a tweet shared by the official account of the president of India.

Ms Murmu signed the Condolence Book in the “memory of Her Majesty the Queen Elizabeth II” at Lancaster House on Sunday.

And photographs showed her meeting King Charles III at a reception hosted by him at Buckingham Palace on Sunday evening.

Earlier confirming her visit to London, India’s foreign ministry in a statement said: “In the 70 years of reign of HM Queen Elizabeth II, India-UK ties have evolved, flourished and strengthened immensely.”

“She played an important role in the welfare of millions of people around the world as Head of the Commonwealth.”

India, a former British colony for 200 years, observed a day of state mourning on 11 September as “a mark of respect” for the Queen. The day was marked with no official entertainment and national flags were flown at half-mast throughout the country.

Ms Murmu is the newly elected 15th president of India, sworn in in late July after she was backed by MPs in a historic moment that saw a politician from an indigenous community taking the country’s highest elective office for the first time.

The Indian president is attending the Queen’s state funeral along with US president Joe Biden and a host of prime ministers of Commonwealth nations – such as Canada’s Justin Trudeau, New Zealand’s Jacinda Ardern and Australia’s Anthony Albanese.

The funeral service began at 11am with politicians, royal family members and key workers among the 2,000 mourners in attendance.

Why Kirstie Alley’s last TV appearance was on ‘Masked Singer’