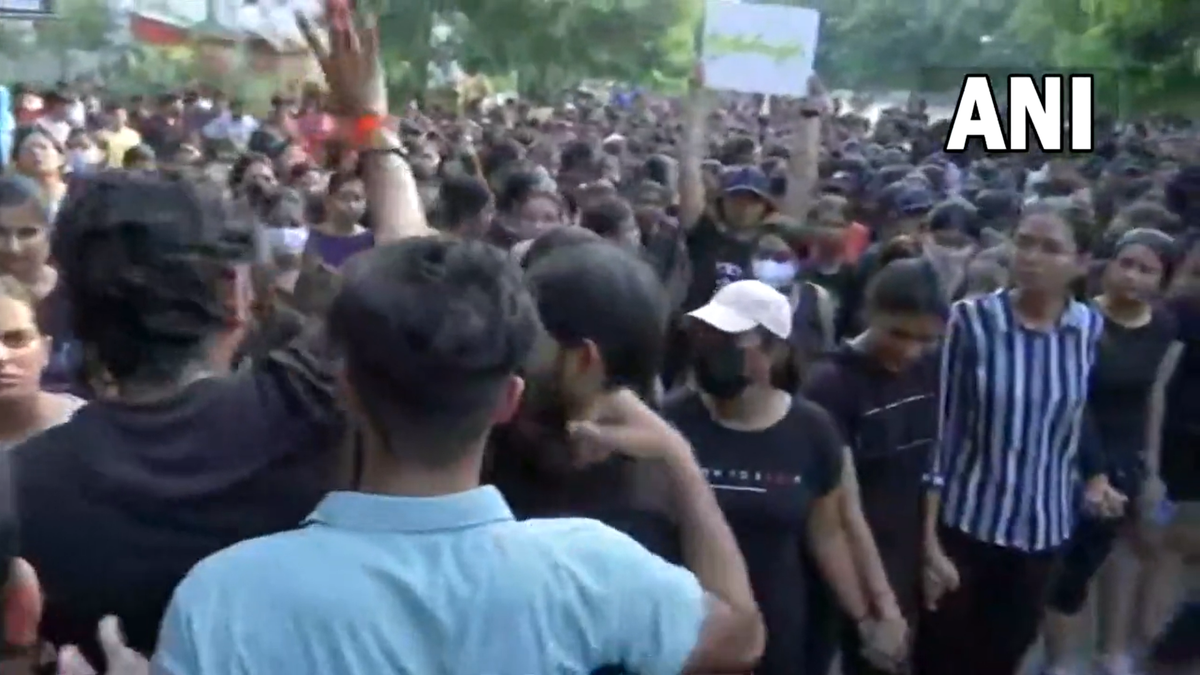 Hundreds of students at a private university in the northern Indian state of Chandigarh are protesting after several female students alleged their personal videos were leaked and no action was taken by the college.

Protests continued on Sunday afternoon as students chanted “we want justice” at the campus after the university denied any videos were leaked.

A woman who was also a student at the same university was accused of recording the videos and sending them to a man in Himachal Pradesh’s Shimla city.

The accused, a first-year MBA student, was arrested on Sunday and police are looking for the man in Shimla.

“Only after he is caught, more details will be known. A forensic probe of her mobile phone will be conducted,” officer Gurpreet Deo said.

Punjab chief minister Bhagwant Mann has ordered a high-level investigation into the incident and appealed to students to avoid rumours after protests turned violent.

On Sunday morning, several students claimed that videos of at least 60 students bathing were leaked on the internet and that subsequently some girls attempted suicide at the university premises on Saturday night.

However, both the claims have been denied by the university and the police following a growing uproar.

“So far in our investigation, we have found out that there is only one video of the accused herself. She has not recorded any other video of anyone else,” Mohali police chief Vivek Soni told the ANI news agency.

Denying any suicide attempts by female students, Mr Soni said: “One student who was taken in an ambulance was suffering from anxiety and our team is in contact with her.”

Chandigarh University chancellor Dr RS Bawa said in a statement that “rumours” that 60 objectionable messages have been found of students are “totally false and baseless”.

“During the preliminary investigation conducted by the university, there have been no videos found of any student which are objectionable except a personal video shot by a girl which was shared by herself to her boyfriend,” he said in a video.

A huge number of protesters gathered on the Ludhiana-Chandigarh highway on Saturday night and the situation turned violent after several police and students clashed. Videos showed police officers deployed at the scene trying to break up the protest and students could be heard saying that “they were beaten”.

A video also went viral of a student being taken to hospital in a vehicle, sparking rumours a student tried to take their own life.

Delhi chief minister Arvind Kejriwal, whose party is in power in Punjab, promised the “harshest punishment” to the culprits, describing it as a “very serious and shameful” episode.

Member of parliament Kirron Kher said: “I am morally shaken by the ghastly incident at Chandigarh University. The name of my city is being tarnished due to this institute. I want to clarify that it is based in Kharar, Punjab. My heartfelt concern goes out to the girls & their parents who are a victim of this incident.”

“Since this matter is very sensitive, it is my request not to forward any unsubstantiated news. There is no news of suicide by any girl student. Guilty would not be spared,” tweeted the minister.

Why I think email is still the best communication service, as Yahoo Mail for iOS gets another upgrade