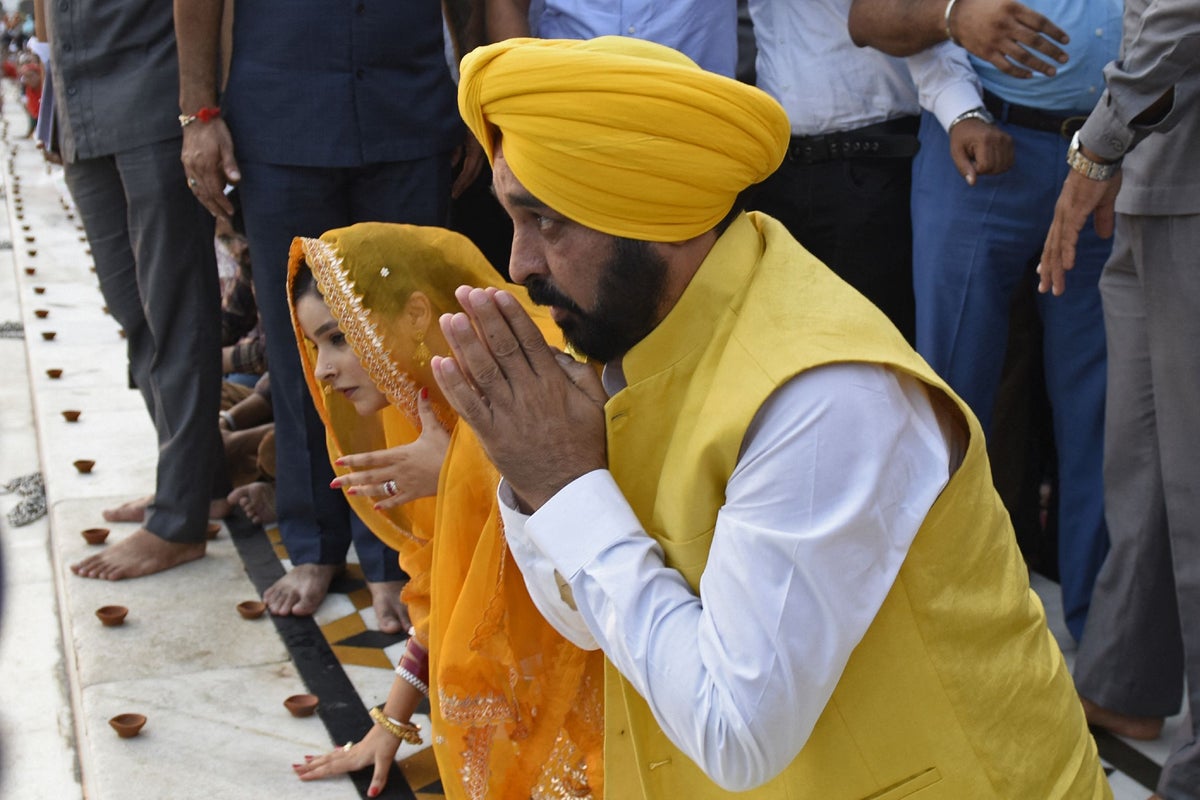 The chief minister of India’s Punjab state is at the centre of a controversy after opposition political parties alleged that the politician was taken off a Lufthansa plane in Germany as he was inebriated.

Bhagwant Mann from the Aam Aadmi Party (AAP) was in Germany for a scheduled trip from 11 September to 18 September to meet foreign investors.

The trip was his first foreign visit since becoming chief minister of the border state earlier this year.

On Monday, opposition leaders accused Mr Mann of delaying the Lufthansa flight bound for Delhi due to his inebriation.

In a tweet Sukhbir Singh Badal, member of the opposition Shiromani Akali Dal, said: “Disturbing media reports quoting co-passengers say Punjab Chief Minister Bhagwant Mann was deplaned from a Lufthansa flight as he was too drunk to walk. And it led to a 4-hour flight delay. He missed AAP’s national convention. These reports have embarrassed and shamed Punjabis all over the globe.”

Mr Badal was referring to social media accounts from co-passengers who alleged that Mr Mann was drunk and “not steady on his feet” and had to be supported by his wife and security personnel.

The passenger added that the flight was delayed by over 4 hours as the chief minister’s luggage that had been added to the flight had to be taken out as he had been asked to get off the plane.

Mr Badal said that the Punjab government needs to come clean and asked the federal government to step in.

“If he was deplaned, GoI [Government of India] must raise the issue with its German counterpart.”

The allegations were soon picked up by the opposition Congress party which called the incident “a big shame.”

The AAP meanwhile lashed out at the opposition and dismissed the reports as “propaganda”.

Malwinder Singh Kang, AAP spokesperson, told reporters at a press briefing: “The chief minister returned on September 19 as scheduled. All these social media reports are propaganda.

“The opposition is rattled because Mr Mann is effectively getting some investment from his foreign trip… you can also check with Lufthansa airlines.”

In a statement later on Monday, the airline said that the plane had been delayed but did not mention whether Mr Mann was intoxicated or not.

“Our flight from Frankfurt to Delhi departed later than originally planned due to a delayed inbound flight and an aircraft change. Best regards,” Lufthansa said on Twitter.

In a statement to The Indian Express, director of media communications of Punjab Chander Suta Dogra also denied the allegations as “baseless, and without a shred of proof”.

“These leaders are not able to tolerate a CM from a humble background and are levelling wild allegations against him. They are unable to tolerate that the government is working so hard. Where is the proof? He took another flight because he was unwell,” she said.

Mr Mann became chief minister of the state in March, an event that propelled the AAP to power in two Indian states.

The party, which is also in power in capital New Delhi, is eying a national role in the 2023 general elections and looking to take on prime minister Narendra Modi’s Bharatiya Janata Party (BJP) in the upcoming Gujarat and Himachal Pradesh state elections later this year.

In 2019, then a member of parliament from Punjab’s Sangrur, Mr Mann who has been under fire from the opposition in the state for his “alcohol problem” had promised to give up alcohol at a rally in the presence of party supremo and Delhi chief minister Arvind Kejriwal.