Ivanka Trump was dressed to impress in Miami on Wednesday as she and her oldest son, Joseph, walked to their local temple with a bodyguard for Yom Kippur.

The former White House senior adviser, 40, is known for her classic style choices, but she opted for a funkier look when she attended services in a blue tie-dye button-down dress. Her beefy bodyguard kept a close eye on her eight-year-old son as he rode his scooter ahead of them.

Ivanka’s husband, Jared Kushner, 41, was later spotted with the same member of their security team when he headed to temple with their daughter, Arabella, 11, and their younger son, Theodore, six. 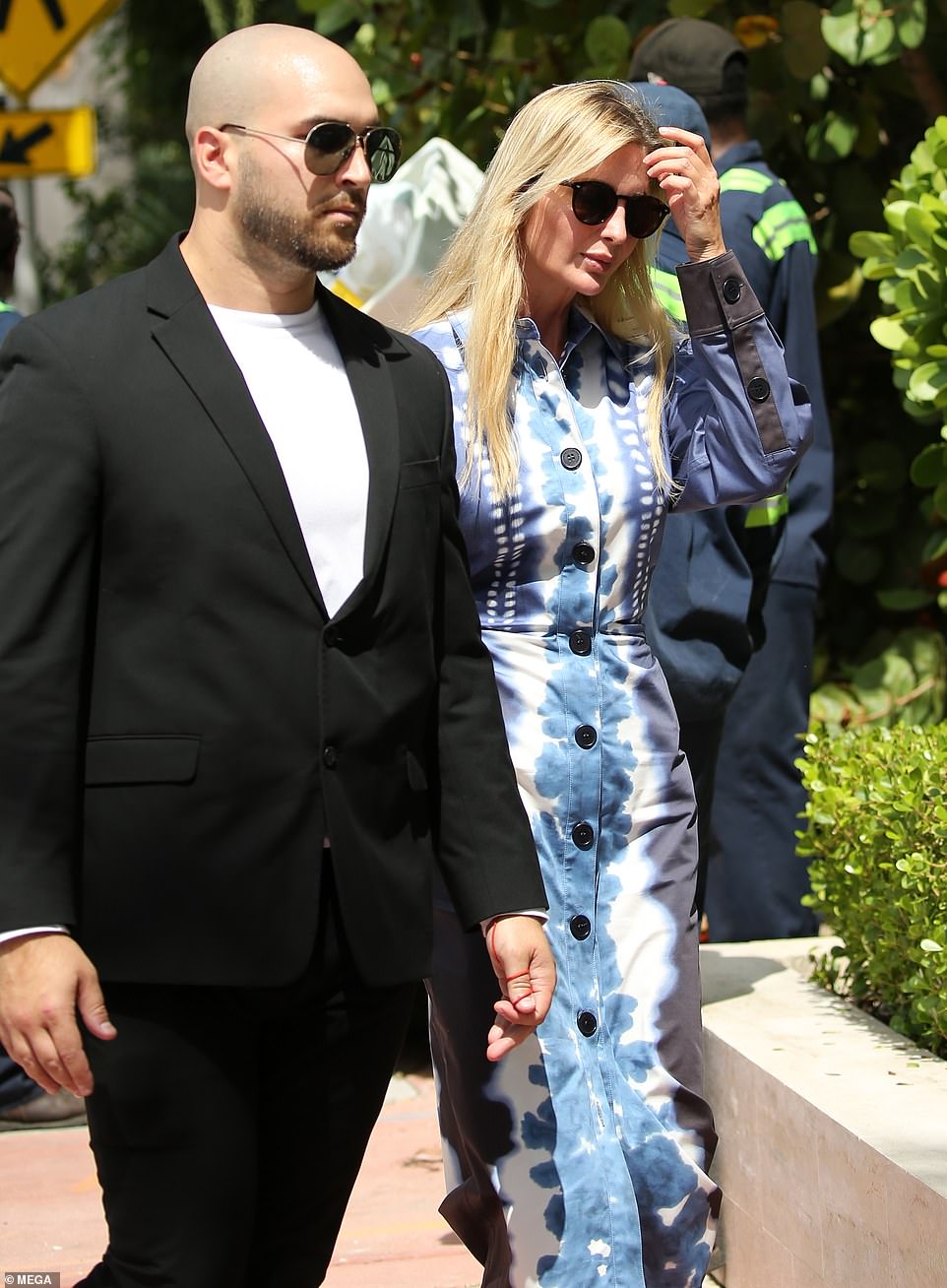 Ivanka Trump, 40, had her bodyguard in tow as she headed to her local temple in Miami on Wednesday for Yom Kippur 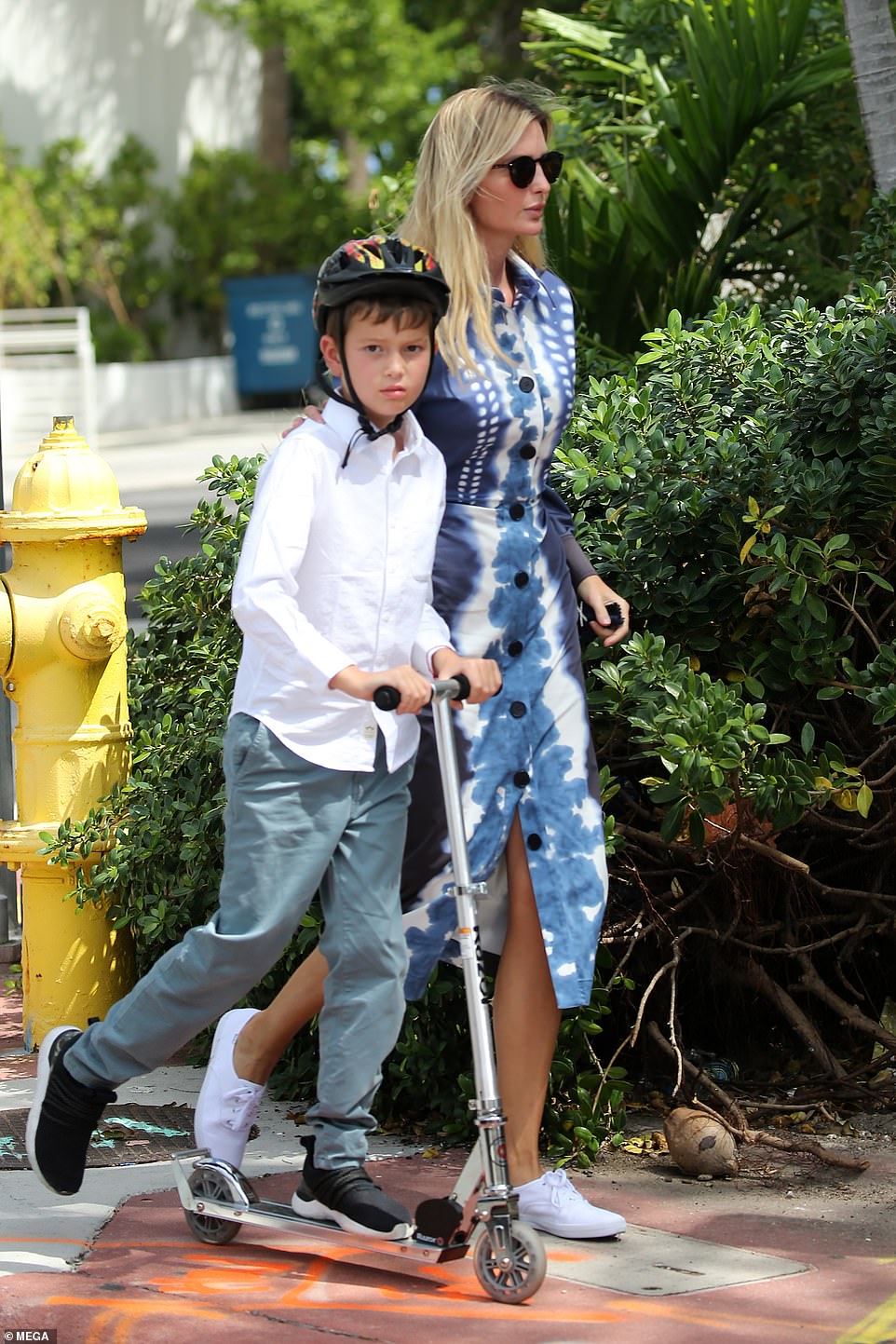 The former White House senior adviser was joined by her oldest son, Joseph, who rode his scooter alongside her 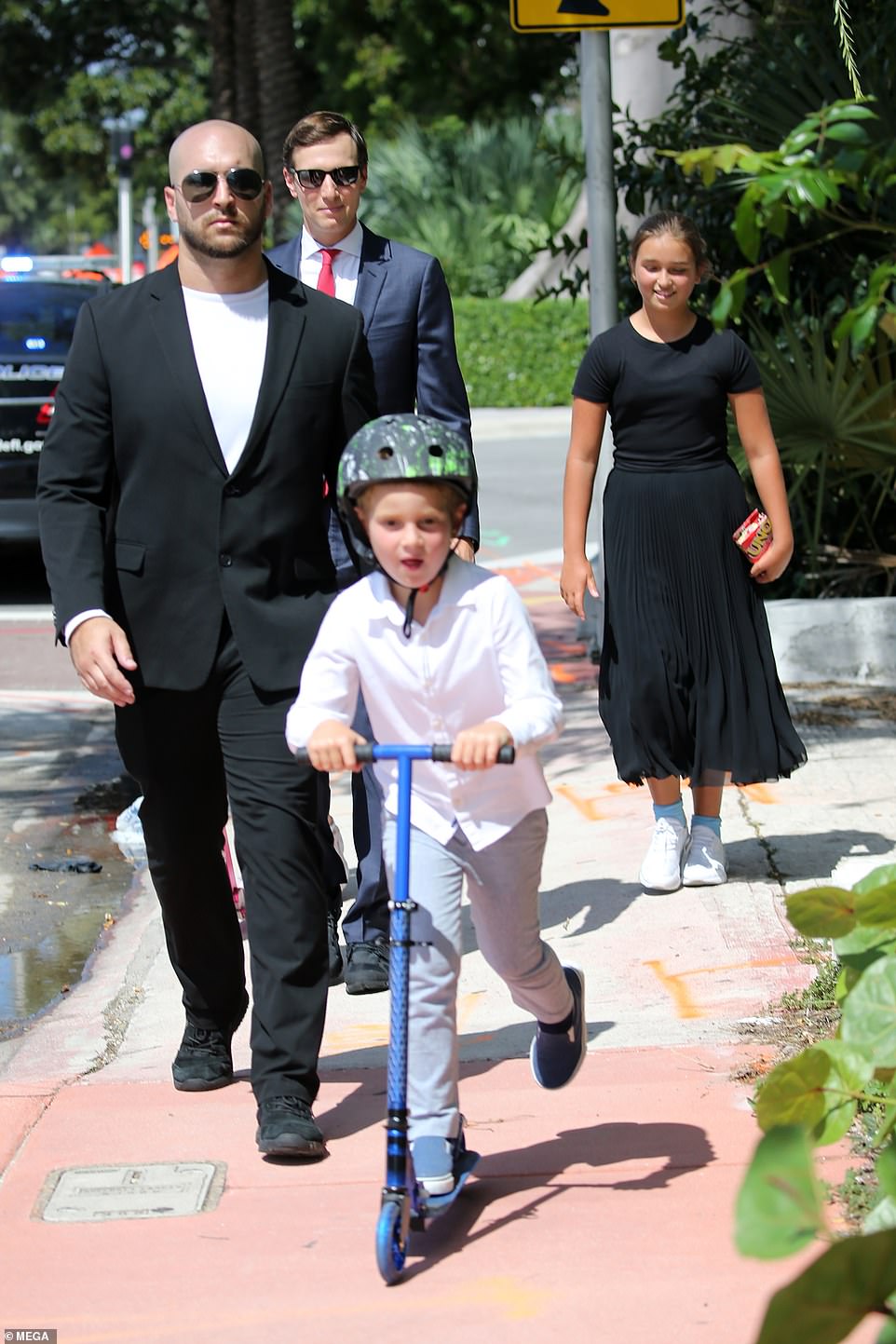 Ivanka’s husband, Jared Kushner, 41, was later spotted with the same member of their security team when he headed to temple with their daughter, Arabella, 11, and their younger son, Theodore, six

Yom Kippur started at sunset on Tuesday and ends on Wednesday at sundown.

Known as a day of atonement, it is the holiest holiday in the Jewish calendar, and followers typically spend the majority of the 25-hour holy day at the synagogue.

Jared and Ivanka are also likely fasting, as those observing Yom Kippur cannot eat or drink until the holiday ends.

The fast is then usually broken with a traditional meal after sundown at the end of the 25 hours, but children under 13 are not expected to follow it.

Everyone in the family had on fabric sneakers, including Ivanka, who paired her button-down dress with classic white canvas tennis shoes.

The former first daughter topped off her look with a pair of dark sunglasses, and she wore her long blonde hair loose around her shoulders.

Ivanka, who has said in the past that she doesn’t own a hairdryer, appeared to have let her locks dry naturally. 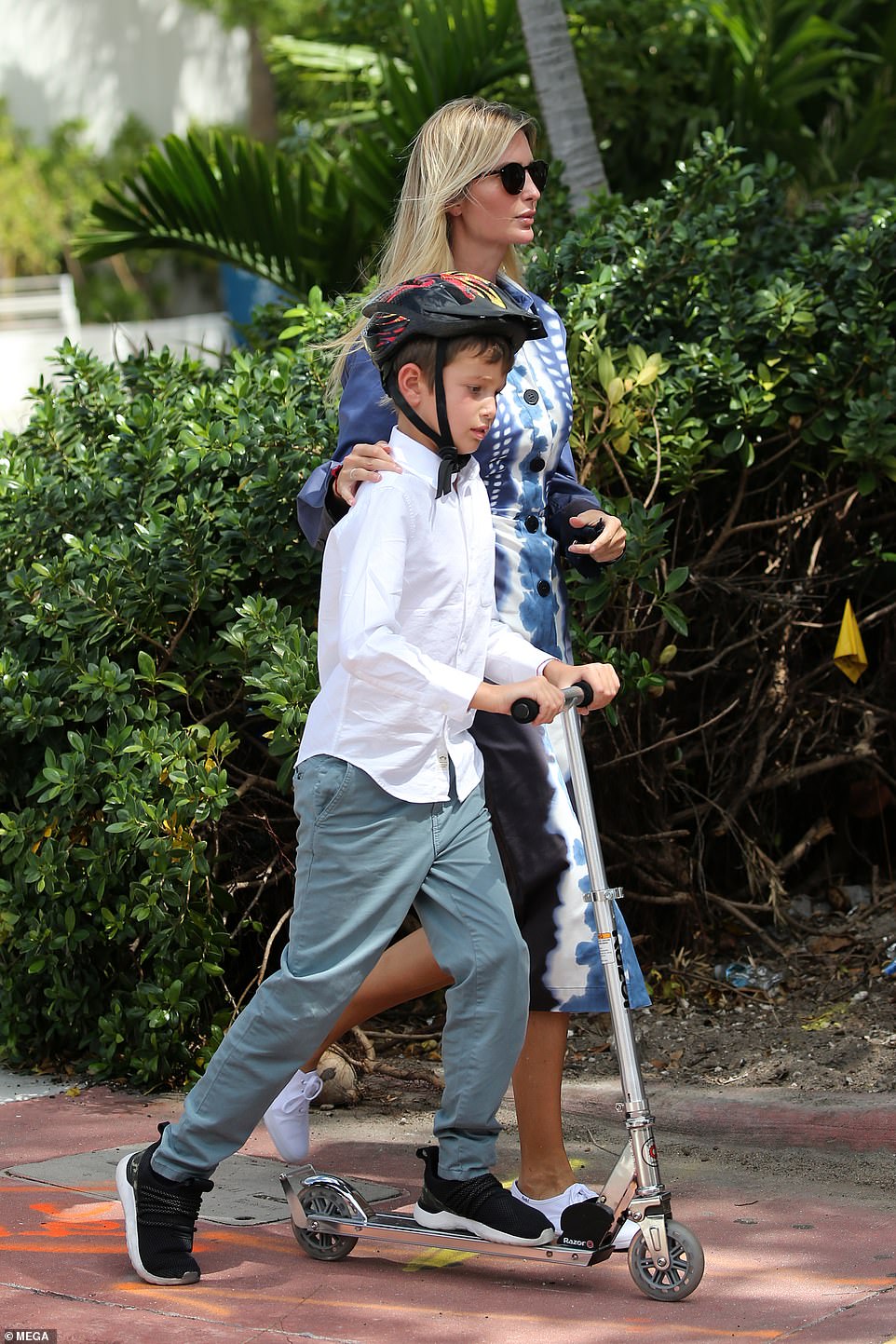 Ivanka is known for her classic style choices, but she opted for a funkier look when she attended services in a blue tie-dye button-down dress 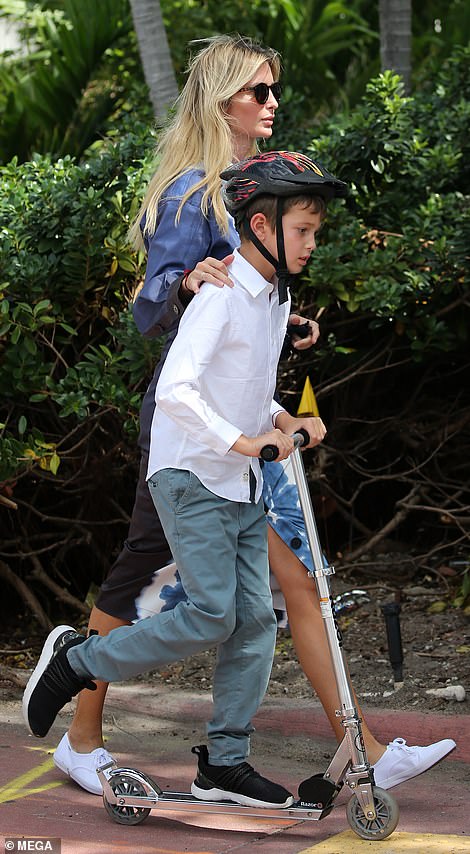 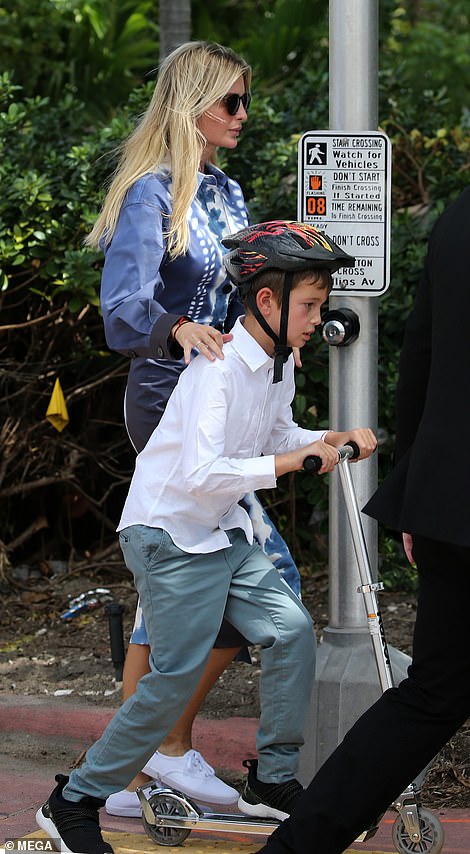 Joseph, eight,  looked like the spitting image of his father in an untucked white button-down shirt and light blue chinos 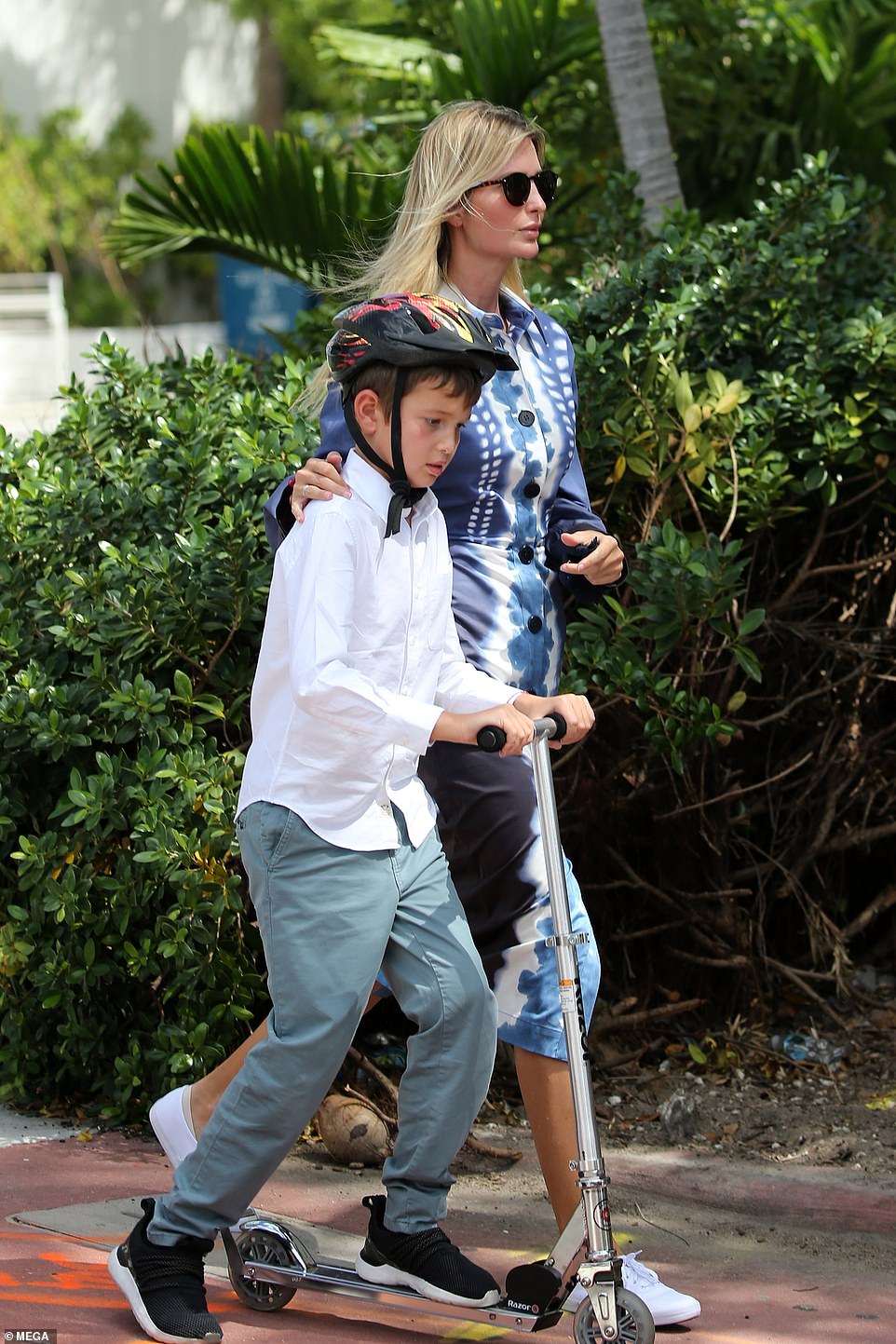 She alternated walking alongside her son and bearded security guard, who wore a black suit paired with a white T-shirt despite the Florida heat.

At one point, she was seen resting her hand on her son’s back as he scooted beside her.

Joseph looked like the spitting image of his father in an untucked white button-down shirt and light blue chinos.

His helmet covered his head while he rode his scooter, making it unclear if he had on a yarmulke per Jewish tradition.

Jared was raised in an Orthodox Jewish family, and Ivanka converted to Judaism before marrying her husband in 2009. They are raising their children in the same faith.

Unlike many Orthodox Jews, the father of three does not keep his head covered with a hat or yarmulke while going about his day-to-day life. He did not appear to be wearing one on Wednesday, though his sons often where them.

In his navy suit and red tie, Jared looked just like he did when he was living in Washington, D.C. and working as a senior adviser for his father-in-law, President Donald Trump. The only difference was he had on black sneakers instead of dress shoes. 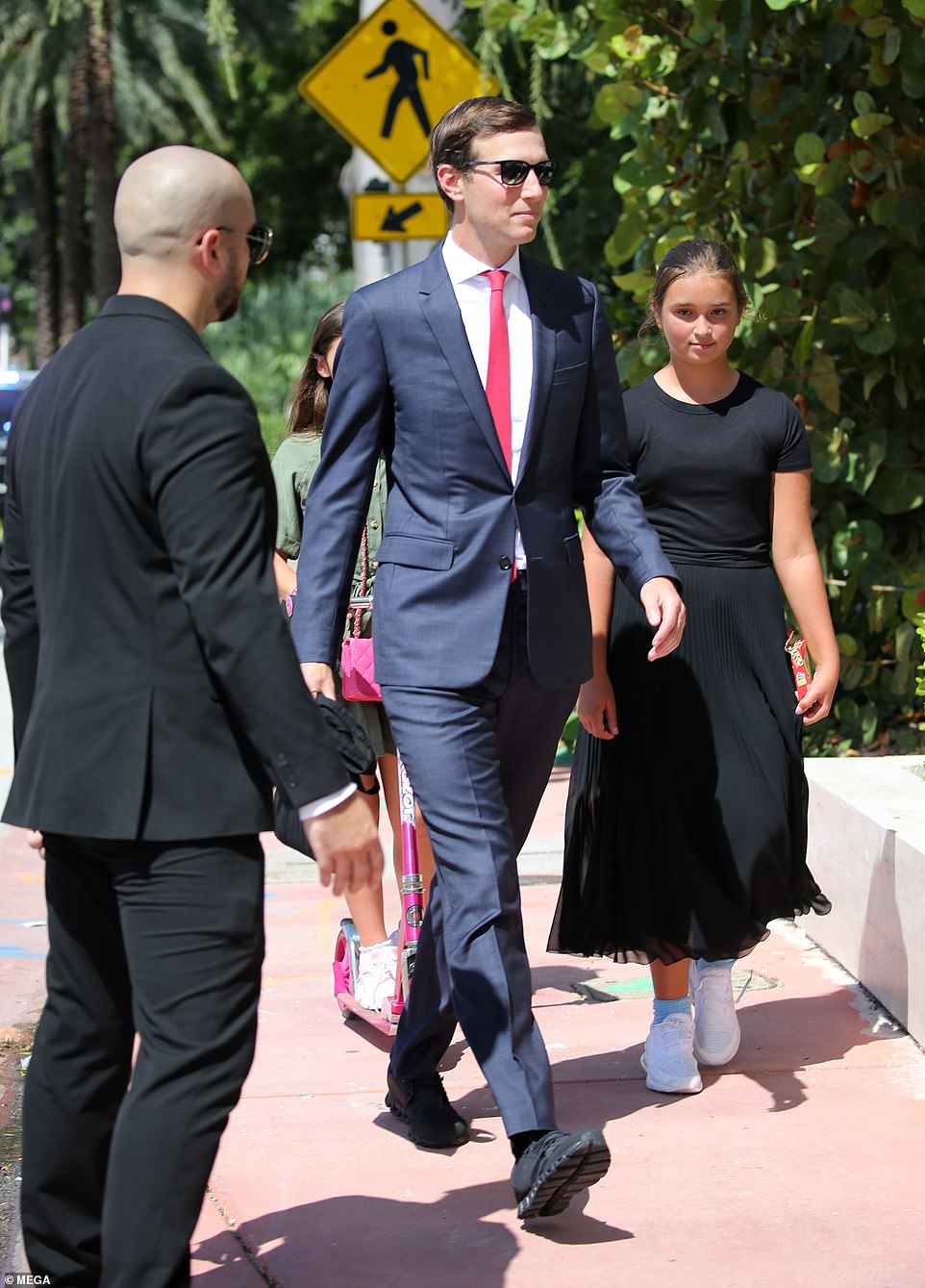 In his navy suit and red tie, Jared looked just like he did when he was living in Washington, D.C. and working as a senior adviser for his father-in-law, President Donald Trump 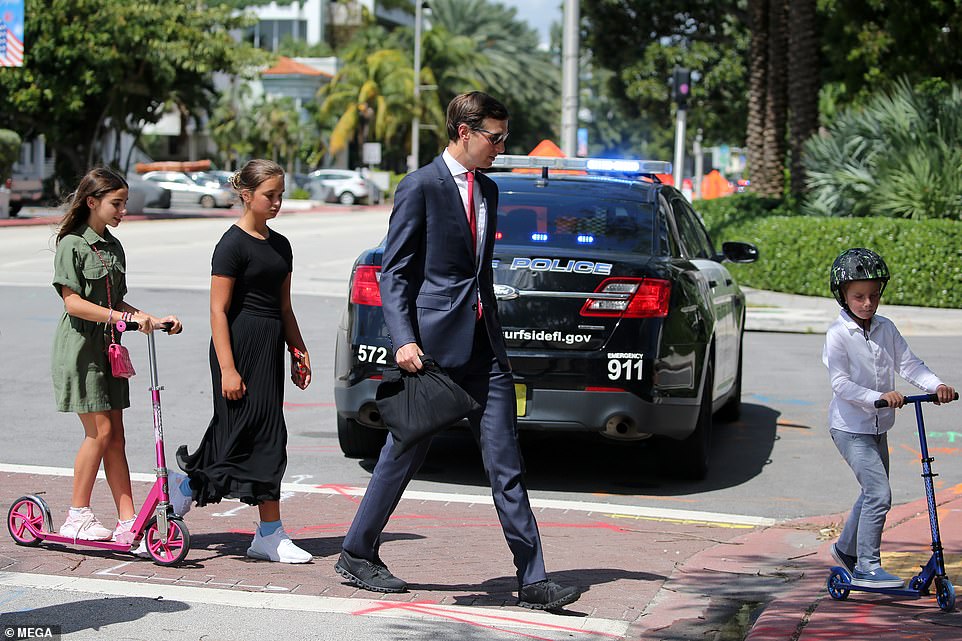 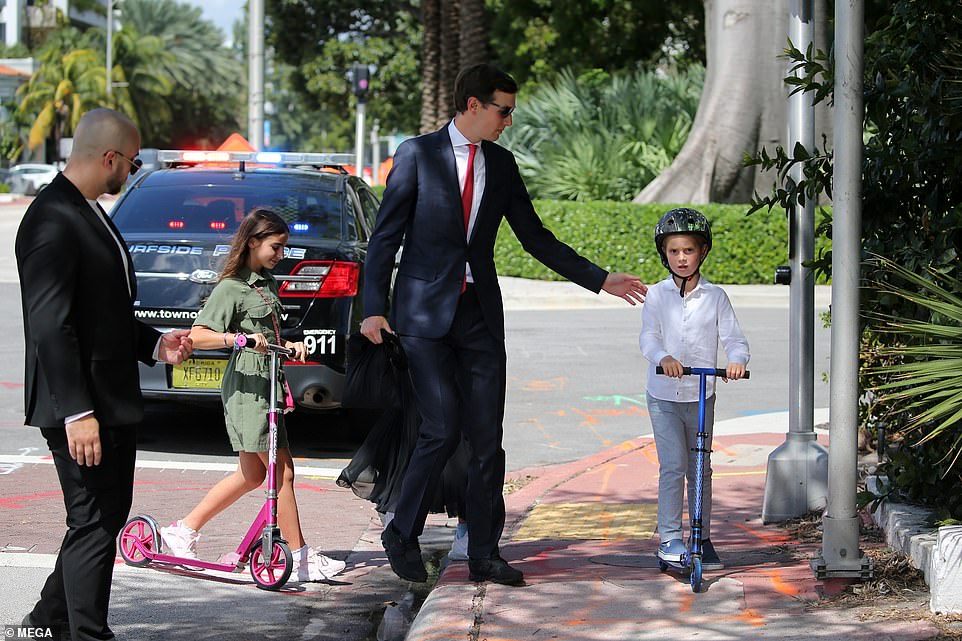 Both Theodore and the unknown girl were on scooters, while Arabella was on foot

Theodore was dressed like his older brother in a white button-down and pastel-colored chinos, and he was also riding a scooter during the family outing.

Arabella had on a black T-shirt and matching chiffon maxi skirt. With her light brown hair pulled back, she looked just like her mother did when she was that age.

The couple’s only daughter did not have a scooter with her, but she was joined by another girl who was on one.

The day before Ivanka’s trip to temple with her family, she was spotted flying first class on a commercial flight from New York to Miami.

Former pro-tennis player Martina Navratilova snapped a photo of the former first daughter sitting in the front row and shared it on Twitter Tuesday.

‘Our tax dollars at work,’ she added, though Ivanka is paying for the security herself.

Ivanka and Jared, who grew up in New York and New Jersey, respectively, relocated to Florida after her father left office. They left their home in the affluent neighborhood of Kalorama in Washington, D.C. and moved into a condo at Arte Surfside, a luxury high-rise complex in Miami.

They are waiting for their mansion to built on Indian Creek, an exclusive island in Miami-Dade County.

Last week, Ivanka and Jared were seen enjoying some fun in the sun with their three children on a beach in New Jersey before  Hurricane Ian pummeled Florida’s west coast.

It is unclear if the family chose to travel to New Jersey to escape the catastrophic hurricane or just managed to dodge the severe weather while visiting family for the religious holiday.

The political power couple was seen arriving at the Kushner Family estate in Long Branch, New Jersey, on Monday, September 26, after going to temple with their kids to celebrate Rosh Hashanah.

Exclusive DailyMail.com show the family playing on the beach together the next day.

The happy family took turns playing Velcro ball toss and throwing a football on the beach. Jared, who recently underwent a second surgery for thyroid cancer, appeared healthy and in high spirits, one point racing his two young boys on the sand.

He confirmed his surgery during an interview with The National Desk last month, saying: ‘I had the surgery last week. It was very successful.’