A 14-year-old boy who died after he was attacked in a park ‘had his whole life ahead of him’ and his death has ‘left his family utterly devastated’, police have said.

Talented footballer Tomasz Oleszak, who lived Gateshead, had moved to the UK from Poland ‘for a better life’ as a ‘shy’ six-year-old.

But the popular schoolboy died in the early hours of yesterday morning after being knifed in the Aycliffe Crescent area of the Springwell Estate just after 8pm on Monday.

Northumbria Police said the teenager’s injuries were ‘consistent with having been caused by a bladed article’. 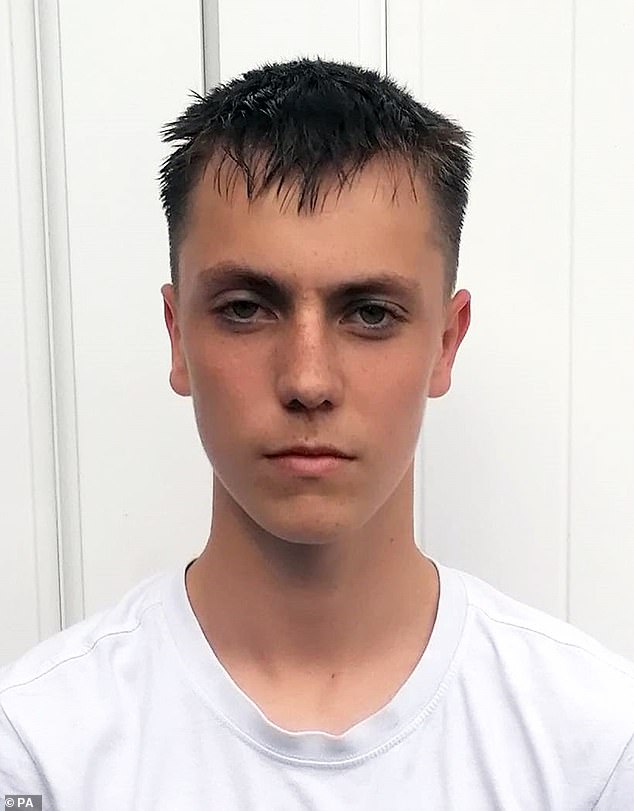 Tomasz Oleszak, 14, died in hospital after being found with a stab wound in the Aycliffe Crescent area of the Springwell Estate of Gateshead on Monday evening 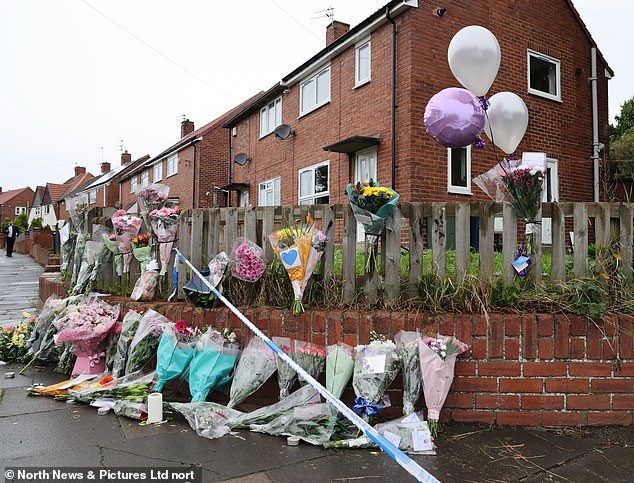 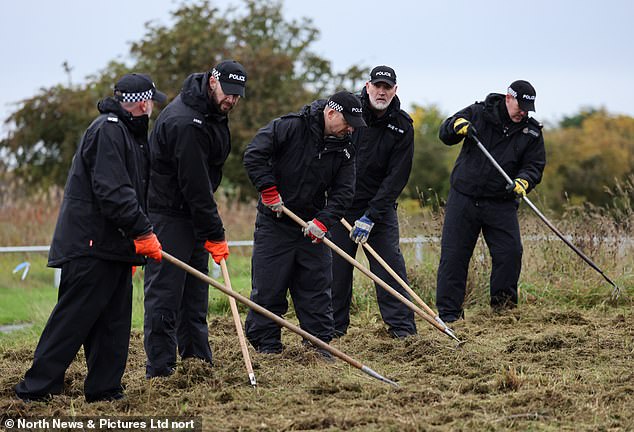 Police are continuing with their investigations, with search teams today scouring the Whitehills Nature Park in Gateshead

He was taken to hospital where, despite the best efforts of medical staff, he later died. His devastated family are being supported by specially-trained officers

A murder investigation has since been launched and a 14-year-old boy was detained by detectives.

Tomasz, who lived with his mum Kamila Wisniewska and his young brother, with those who knew him saying he was a ‘friend to so many’ on the Springwell estate, which had been home most of his life.

His family moved from Wroclaw in south western Poland and his mum found work at a local biscuit factory as the family became a well liked part of the Springwell community.

Tomasz was a keen footballer and played for the local Cleveland Hall junior football team as a midfielder in the under-15s squad.

Mr Boustead said: ‘Tomasz came to us as a very young boy soon after his family arrived in Gateshead from Poland.

‘He was only six and a shy young lad who didn’t speak any English at that time.

‘It must have been so difficult for him to integrate in the community and within his team but he was such a determined boy and over time he started to feel at home.

‘As his English improved he got to know the lads better and made friends. He stuck at his football and played right the way through the teams until Covid struck.

‘There was obviously a break at that point and we believed he went back to Poland but returned when it was over.

‘He came back more confident and assured, he’d developed into a fine young man and was an important part of his team and this grassroots footballing community.

‘We are devastated by what’s happened to him, he came to this country with his parents and family for a better life and he lost it like this to a quite hideous crime. 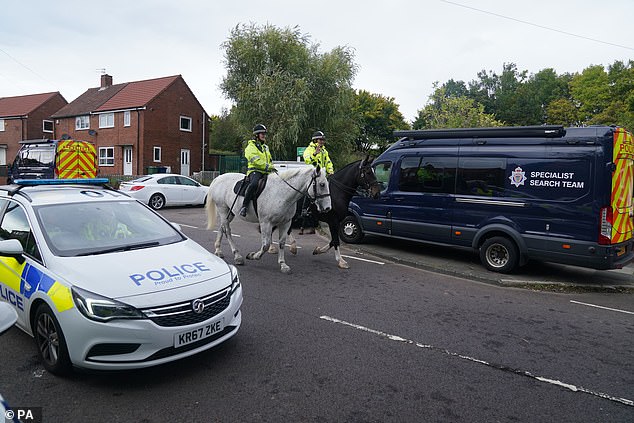 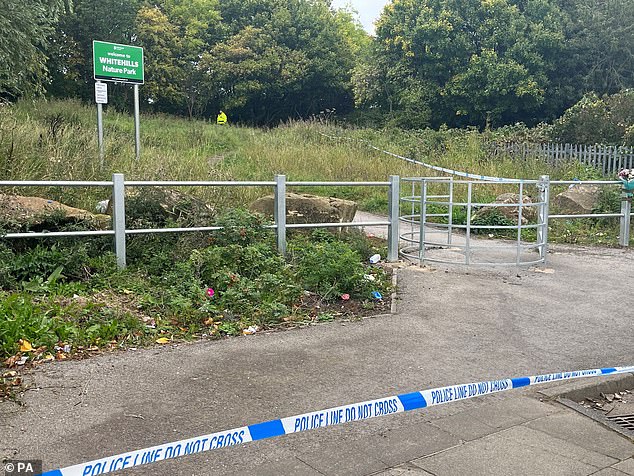 The scene at Aycliffe Crescent, Gateshead, on Tuesday following the fatal attack the night before

The teen’s coach, Paul Howson, set up a Gofundme page to help the family, raising more than £13,500 by 4pm on Wednesday.

Paul paid tribute to Tomasz, saying: ‘On behalf of myself and Tomasz’ coaches we are all very saddened to hear of the tragic events that unfolded on 3rd October 2022 resulting in Tomasz sadly passing away in the early hours of the 4th October 2022.

‘Tomasz was a very kind, caring young man, he was brought to the UK by his parents for a better life and didn’t deserve what has happened to him.

‘He was liked and loved by many; he was a very passionate footballer who we all had the pleasure of coaching.

‘He was a much loved member of his local community and will be sadly missed by all who loved him.

‘This is every parent’s worst nightmare come true and we can’t imagine what they are going through.’

A fundraising night, which had meant to drum up cash for a new 3G artificial turf pitch for the club will now instead be raising money for Tomasz’s family, Mr Boustead said.

He added: ”I’ve been in football for 50 years and I’ve never known a tragedy like this, it’s so hard to accept.

‘When someone within our community is in need we rally round and that’s why the fundraising for the family began.’

Tomasz attended Cardinal Hume Catholic School, in Gateshead. In a statement, headteacher Brendan Robson, said: ‘We are devastated to hear of this tragic incident involving one of our students. Our thoughts and prayers are with his family and friends at this very sad time.

‘As a school we are doing all we can to support our students and everyone in our community who is affected; we are also supporting the police with their ongoing enquiries.’

Police are expected to remain at the scene of Monday’s incident throughout today.

Chief Superintendent Helena Barron said: ‘Tomasz had his whole life ahead of him and this tragic incident has cut that life short and left his family utterly devastated. 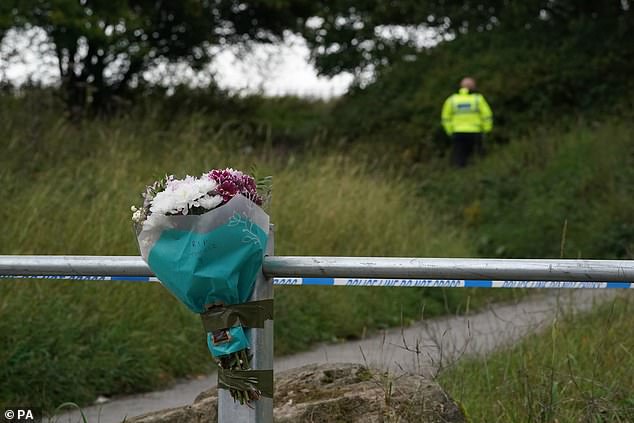 Neighbours spoke of their heartache, with some leaving floral tributes at the scene on Aycliffe Crescent, Gateshead, on Tuesday 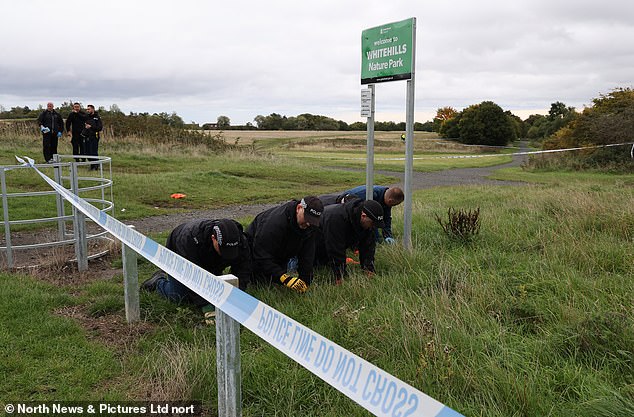 A 14-year-old boy has been arrested on suspicion of the murder and remains in custody. Pictured are police scouring for clues near the site of the killing on Tuesday 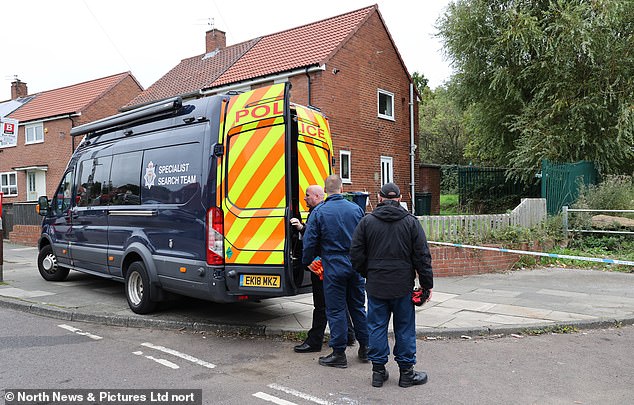 A 13-year-old girl, who was arrested on suspicion of assisting an offender, also remains in custody

‘Their grief is unimaginable and they are in the thoughts of everyone at Northumbria Police as we continue to support them in every way we can.

‘The investigation is very much ongoing and I want to thank the Springwell Estate community and everyone who has come forward with information for their support.

‘While incidents of this nature are rare in our region, we do recognise the impact they have on the lives of those involved and the wider community.

‘When they do occur we are committed to bringing those responsible to justice.’

The senior officer also urged people ‘not to speculate’ about details of the investigation and added: ‘What might seem like an innocent comment or post on social media to you, could in reality disrupt an on-going investigation and cause further upset to the family of the victim.

‘We would ask that if you did see something or have information in relation to what has happened, please come forward directly to officers.’

News of the teenager’s death rocked the local community, with horrified residents coming out in their droves to lay floral tributes at Whitehills Nature Par in Tomasz’s memory.

Schoolfriends and members of the public left bouquets of flowers on the outside gates of the park on the Springwell Estate in a moving display of grief as the Gateshead community comes to terms with its tragic loss.

One person also paid tribute by saying that the teenager had ‘gone too soon’.

They said: ‘You were so loved. Rest in Peace.’

Another expressed their sorrow at the violent nature of the teenager’s death, saying that they will ‘miss them’.

They said: ‘I am so sorry you had to pass away in the way you did. I’m just glad you are no longer suffering. You’re in a better place now and I am going to miss you a lot. 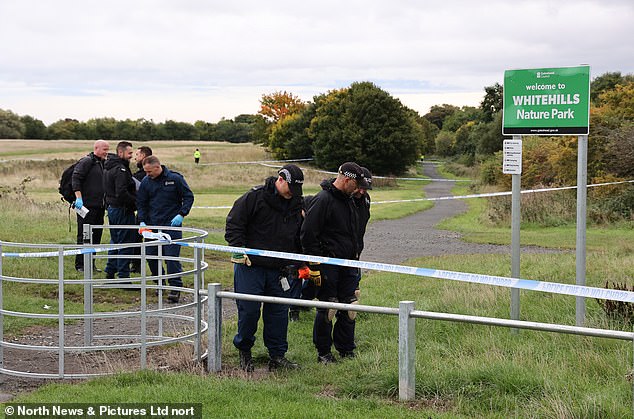 Emergency crews were called to the Aycliffe Crescent area of the Springwell Estate just after 8pm on Monday, where they found the teenage boy suffering from a stab injury. 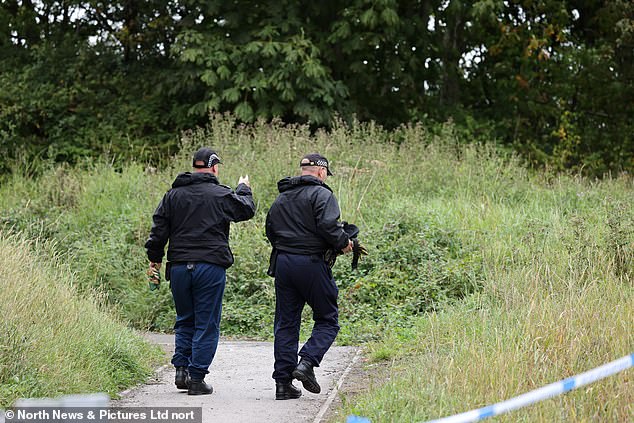 The boy was taken to hospital where, despite the best efforts of medics, he later died in the early hours of Tuesday morning 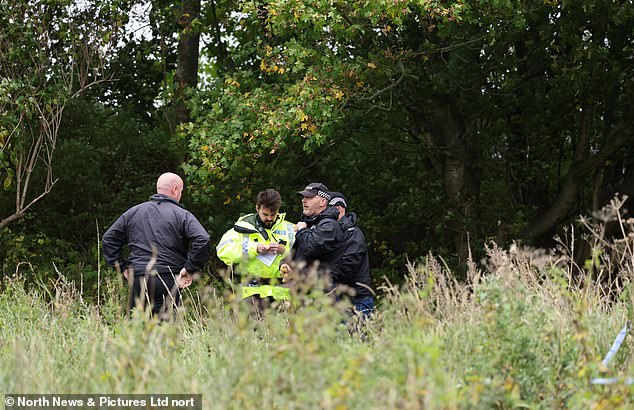 ‘And remember, we will always love you. Sending you good luck in heaven.’

And in another moving tribute, one message said: ‘Fly high brother. Can’t believe you are gone. Gone too soon.’

Neighbours living close to the scene of the incident have also told of their shock.

Administrator Glenisa Milasiute, 37, who has lived in the area for four years with her partner and two children, aged one and three, said: ‘It’s not the best area but you expect people to steal not kill. It’s just sad.

‘It makes me worried about going out in the area. The council should look into putting CCTV here to make us feel safer. I didn’t see anything but my partner went to the shops and saw something was going on.

‘He asked the neighbours and they said someone had been stabbed. He said he heard youngsters screaming but just like kids do when they’re hanging around.

‘Our children don’t play in the street usually but it’s a worry. We were already thinking of moving but this has made us consider that more.’

One elderly resident said: ‘I heard the ambulance last night and the blue lights shone through my window.

Another resident said: ‘It doesn’t surprise me around here, the most shocking part is that they’re children.

‘He was a bairn, he didn’t deserve to lose his life. It’s kids these days, it’s all the things they watch on the internet.’

Another neighbour on the street, who asked not to be named, said: ‘We saw the lads running around screaming and shouting at about 8pm – it was about four lads that ran past.

‘My partner was out having a cigarette and she rang an ambulance for the victim and waited with him until they came.’

Another neighbour, Ella, who only wished to give her first name, said: ‘I heard someone screaming when I was putting my daughter to bed, then when I was putting something in the bin about 10 minutes later I saw all the police cars.

‘I spoke to my neighbour across the road to ask if everything was OK and she told me her son’s friend had been stabbed and police were trying to revive him. She was crying, she was absolutely devastated.

‘She said they went to school together and he was a good kid.

‘It’s been really sombre today. My son plays outside in the street, and it’s sad. You don’t expect it to happen where you live. It’s the fear for our kids.

‘It’s always been really good round here but we have had a couple of incidents in the six-week holidays with teenagers acting out, but it’s not usually like this.’

Northumbria Police and Crime Commissioner Kim McGuinness said: ‘It’s devastating that our region has lost another young person to serious violence and my thoughts are with the victim’s family who will be experiencing unimaginable pain.

‘This should never have happened and it now sits with our police to carry out extensive enquiries to establish the full circumstances that have led to the senseless loss of a young life.

‘I recognise the shock and concern that will no doubt be felt across local communities and I know officers will be on hand to offer reassurance.’

Female police officer, 52, who stole more than £14,000 in cash from evidence stores is facing jail