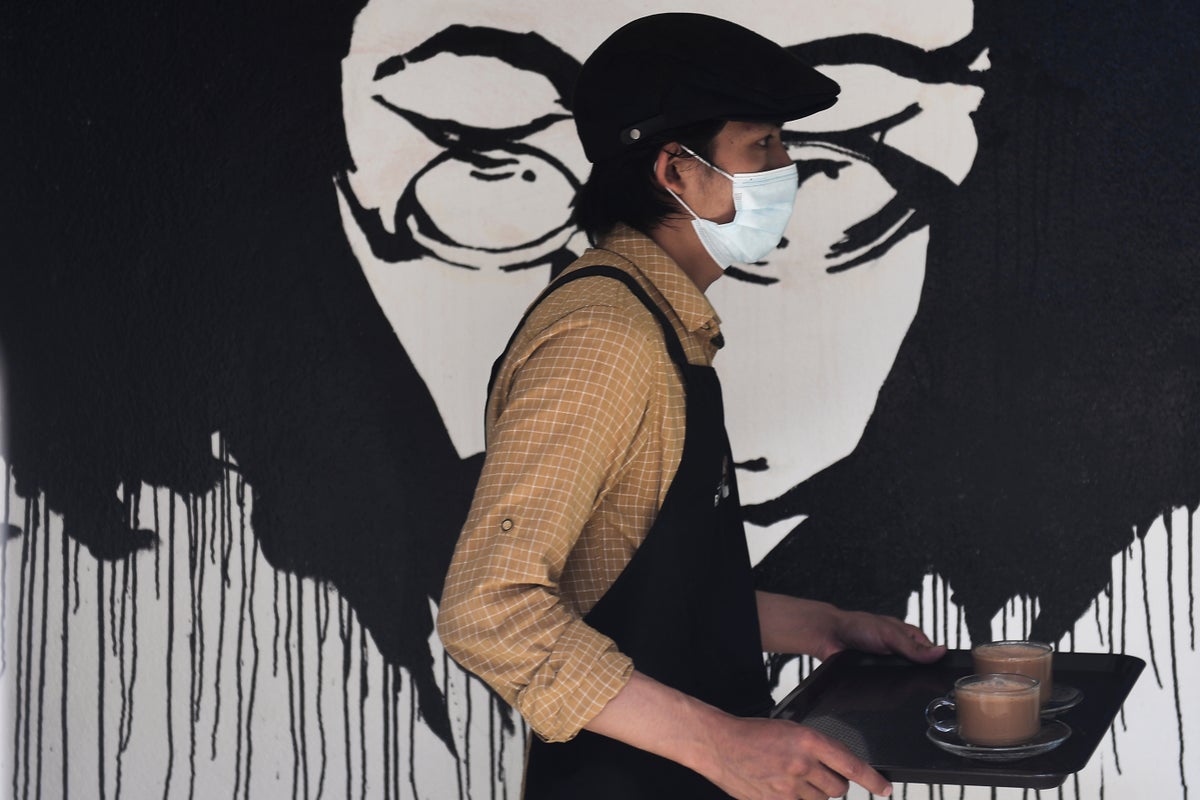 At a newly opened tea shop named “Freedom”, the tea is brewed strong, then stirred with evaporated and condensed milk by a revolutionary on the lam.

Food is cooked over a gas stove by a 53-year-old woman forced to flee her home because of her support for the Myanmar opposition, and served by teenage waiters targeted by authorities for attending pro-democracy demonstrations. Customers pay at a counter staffed by a young woman with long hair and a sweet smile – a former pre-school teacher who refused to work under the generals who seized power in Myanmar early last year.

As Myanmar spirals deeper into civil war, this tea shop along the country’s border with Thailand has become a haven for exiles. Six days a week, recent migrants filter through the metal gate of this converted semidetached house, settling on wooden crates that serve as tables and chairs. Burmese folk songs play from speakers placed on the floor, and the woody smell of cheroot cigars hangs heavy in humid air. Over cups of tea, customers and staff talk about what they’ve heard about the fighting back home and the latest person they know in hiding, in jail or dead.

“Did you hear about the barn?” a customer asks a friend one recent afternoon, referring to an empty farm building along the border where Myanmar villagers fleeing military airstrikes had been sheltering.

“Blocked off,” he continues. “You can bring supplies in but they’re not letting anyone out.”

More than 176,000 Myanmar nationals have crossed into Thailand since the military takeover, according to the International Organisation for Migration. Thousands more are arriving through the jungles every month, desperate to escape the junta’s brutal crackdown on opposition. Past the border, the lucky ones get picked up by humanitarian organisations that house them in hotels and help to file their applications seeking refuge or asylum. But far more rely on informal networks of support.

Like the tea shop, these places are products of Myanmar’s civil war and reflect its ongoing toll. But they’re also places where life keeps happening, where people find new ways to resist the military, to form new communities and – inevitably – to fall in love.

“We’re trying to stand together,” says Thet Swe Win, who leads the crew behind Freedom tea shop. “It’s the only thing we can do.”

Tall, with waist-long hair and a toothy smile, Thet Swe Win, 36, arrived in Thailand six months after the coup, carrying just his laptop and a family longyi, a traditional sarong-like garment. He ran a nonprofit in Yangon and was well-connected to the dissident community, so he quickly became involved in the effort to support new arrivals, he says.

Initially, getting people shelter and keeping them out of jail took up most of his time, he adds. But as fighting in Myanmar worsened and the prospect of returning to the country narrowed, he realised that people in the border region also needed jobs.

Thet Swe Win, who also goes by Thet, pulled together $6,700 in savings and rented the two-story building on a dusty street six miles from the border. He recruited a ragtag group of new exiles, then came up with a plan: the first floor, which had an open-air space of 200 sq m (about 2,150 sq ft), would be a restaurant serving tea and simple food like kyay oh – noodles with pork and egg – and mohinga, a fish soup. The second floor would be a free venue for people to hold activities for the diaspora.

Half of the profits from the tea shop would go toward sustaining the people who worked there, Thet decided. The other half would be sent back into Myanmar to help people who had been displaced.

The exiles set up scaffolding by the side of the house for an outdoor kitchen. Then, on 1 August, they opened for business.

“A traditional tea shop,” Thet says one recent afternoon, beaming as he walks past tables packed with people. “You can eat, smoke, talk. All the things that matter to Burmese.”

Waves of Myanmar people have come to Thailand before. In the 1980s, for example, when military persecution drove tens of thousands of ethnic Karen refugees to flee Myanmar, Thailand allowed international agencies to set up camps that provided food and shelter. This time, advocates say, the Thai government hasn’t given official recognition to the influx of people, making it difficult for humanitarian agencies to provide aid.

“There’s nothing now to welcome the newcomer,” says Aung Moe Zaw, 55, a Myanmar politician and activist who lives along the border. “For our survival, at least, we have to support one other.”

Thet says he learns of new arrivals nearly every day, often through calls from the local jail. In mid-August, he came across a gym trainer from the city of Mandalay who fled after being targeted by the military for attending protests. He was unshaven and told Thet that he’d lost 50lbs since he got to Thailand. By the following week, the gym trainer had joined the tea shop as a dishwasher. He cleaned up his beard and put on some weight.

Despite security risks, the rebels aren’t subtle about what their tea shop represents.

A mural of the revolutionary Che Guevara stretches across a wide wall, visible to passersby. The receipts are printed with the Burmese words for “freedom.” And the tables are labelled, with torn-up pieces of cardboard, with the names of cities in Myanmar that have seen the deadliest fighting: Mindat in the mountains of western Chin state; Pauk in central Magway; Myaung in next-door Sagaing. The effect is such that when waiters call out orders, it sounds sometimes like they’re paying homage to the fallen – “drinks for Mindat!”

They’re not looking to be caught, Thet says, breaking into a slight smile. But they’re not looking to hide either. Even though most of the employees have spent time in detention or had their homes raided by the military, they still want to be part of the resistance. So they can’t share their names, he says, but they’ll share their stories. (The names of tea shop workers have been withheld because of security concerns.)

Take for example the cook, Thet says, standing by the kitchen door and gesturing at a middle-aged woman in an apron and a hair net, sweating over a wok. She used to run a thriving bus company in Bago, a city of 250,000 northeast of Yangon, and when her son joined the resistance, she sheltered him.

Or meet the manager, Thet continues, turning his head to look at a petite woman with a round face and dark hair going over accounts by a table near the cash register. In Yangon, she was a private banker, he explains, married with two kids to a man who worked for the central bank. When her husband joined the civil disobedience movement and refused to work, a warrant was issued for his arrest.

She raises her brow as a stocky man with sharp, almond-shaped eyes exited the kitchen. He was taking a break, he says impishly. With a towel draped over his shoulder, he walks over to the cash register, smiling at the cashier.

“Oh, don’t get me started on this big guy,” Thet says loud enough for him to hear. “Our teamaker.”

He’s 29, gregarious, a civil engineer from Bago. He’d been an activist at university, and when the coup happened, he led students and alumni in mass protests.

Part of him begrudged the idea that he’d spent so many years poring over physics problems only to spend his days stirring tea, he said. But he’d been trying, of late, to focus on what he was grateful for. He wasn’t in prison. And when he got to Thailand, he’d met a girl at one of the safe houses – a former pre-school teacher with the sweetest smile.

“He’s a fighter,” the cashier says, giggling at her fiance. “That’s what I like about him.”

One recent Tuesday evening, as customers trickled out, the gym trainer picks up a guitar. Leaning against a motorcycle, he picks at a few strings, trying to remember the chords of popular music that played in Myanmar cities before the coup. Setting down washcloths and brooms, others in the shop gravitate toward him.

Across the border region, there had been whispers that the fighting in Myanmar was about to worsen – that the military was going to launch an offensive once the monsoon season ended in October. For the exiles at the tea shop, it was difficult not to worry.

But the following day, Wednesday, was their weekly day off and so for a moment, they let themselves relax.

With the guitar playing, they brew tea. Then they let themselves talk, smoke and sing as the sky turns deep orange.

HBO Max returns to Amazon Prime channels for $14.99 a month

Here’s a closer look at the Dodgers’ top five prospects

Apple Car on track for 2026 release, under $100K price, custom chip, and no full self-driving at launch