Donald Trump has fired off another attack on the National Archives and Records Administration, which handles presidential records, after the FBI seized thousands of documents from the former president’s Mar-a-Lago estate that were allegedly government property.

‘There is no security at NARA. I want my documents back!’ Trump complained in a lengthy statement on Tuesday, accusing the federal agency of bungling the handling of government documents.

The Justice Department says it seized roughly 11,000 documents, including about 100 with classification markings, during an August 8 search of Mar-a-Lago, part of a probe into potential violations of laws governing the handling of government records.

Investigators say that many of those documents belong in the National Archives, but Trump lashed out at the agency in his statement, citing an embarrassing 2009 incident in which NARA lost a hard drive of records from the Clinton administration. 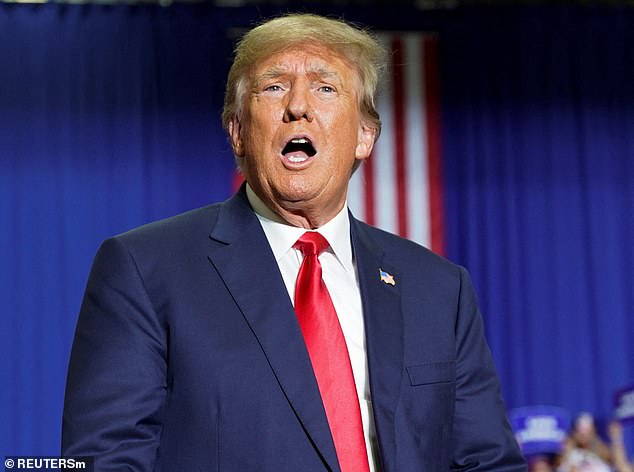 Donald Trump slammed the National Archives and Records Administration, which handles presidential records, after the FBI seized thousands of documents from Mar-a-Lago 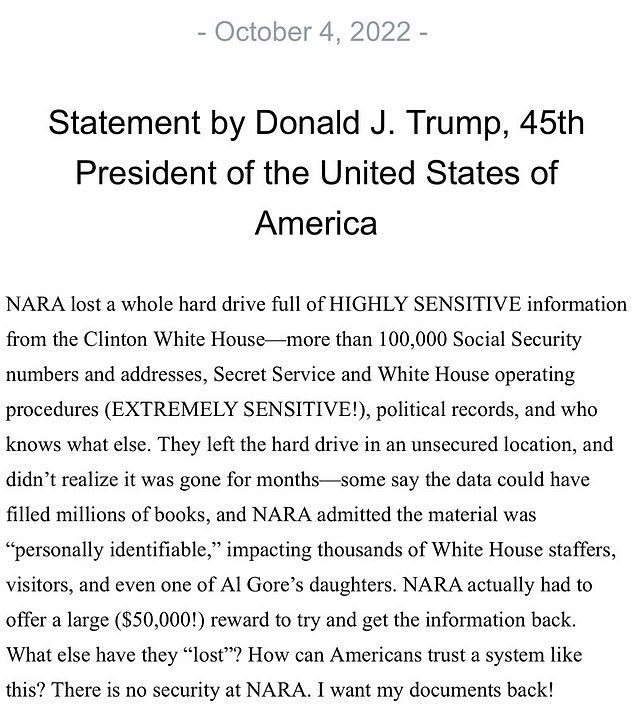 Trump lashed out at the National Archives in a statement on Tuesday, citing a 2009 scandal in which the agency lost a hard drive with records from the Clinton administration

‘NARA lost a whole hard drive full of HIGHLY SENSITIVE information from the Clinton White House,’ wrote Trump. ‘What else have they “lost”? How can Americans trust a system like this?’

The hard drive in question was found to be missing from a processing room at NARA’s College Park, Maryland, facility in March 2009.

The missing drive contained names and social security numbers for some 15,750 individuals, according to a statement from the agency.

NARA said at the time that the hard drive did not contain any original records, only backups. But it does not appear the missing drive was ever located.

The National Archives press office did not immediately respond to an inquiry from DailyMail.com after business hours on Tuesday.

Meanwhile, Trump has asked the Supreme Court to intervene in the Mar-a-Lago case, after an Appeals Court ruling that put a stop to allowing a ‘special master’ to review classified documents seized from the president’s Florida club. 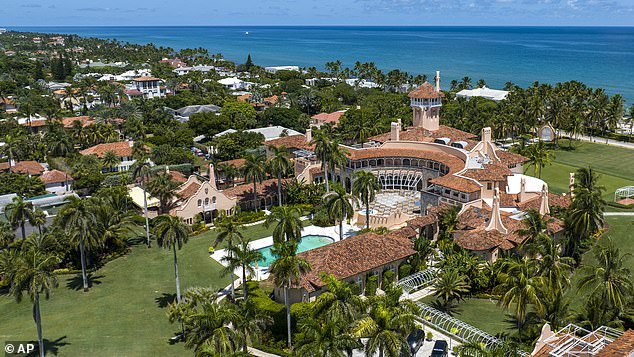 Trump wants to revert back to a process where a senior judge acting as a special master pores over material seized in the raid of his Florida club to adjudicate Trump’s claims over material the former president considers privileged.

That could allow Trump to use that review to bounce certain material marked as ‘classified’ or even ‘top secret’ and keep it out of the hands of government investigators as part of their probe related to the removal and retention of government national security documents.

Trump’s lawyers asked Justice Clarence Thomas to issue an order that would undo the appeals court’s move on an emergency basis. Thomas, who has emerged to lead the court’s 6-3 conservative majority, oversees the 11th Circuit Court of Appeals as Circuit Justice, although he could send the matter to the full court.

It is just the latest turn in a fight that has whipped its way through the courts and put Trump’s legal woes back in the spotlight in the run-up to the November elections.

After Trump-appointed Judge Aileen Cannon named a ‘special master’ to review the material seized during the FBI search, the Justice Department went to the 11th Circuit seeking to overturn part of her ruling.

They sought to put an end parts of the order requiring the special master to go through classified documents – with about 100 documents marked classified seized in an August 8 search – and where Trump was asserting privilege claims. 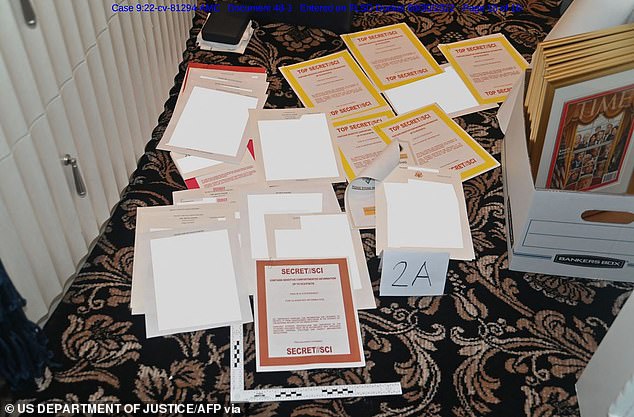 The government prevailed, even as the special master kept his overriding role. District Judge Raymond Dearie, who was recommended by Trump’s team, remains in the role. A three-judge Appeals Court panel ruled in DOJ’s favor.

Trump’s team argued that any interference in the review of material – which comes amid Trump’s own claim of privilege –  ‘erodes public confidence in our system of justice.’

Legal experts pointed out Tuesday that Trump’s team did not seek to toss another part of the appeals court’s ruling: that the DOJ could continue to use classified materials in its investigation.

They argue that it compromises ‘the integrity of the well-established policy against piecemeal appellate review and ignoring the District Court’s broad discretion without justification.’

Just as DOJ has argued that Trump’s ploy could interfere with a government investigation under the Espionage Act, Trump’s team argues it could harm the special master’s role. 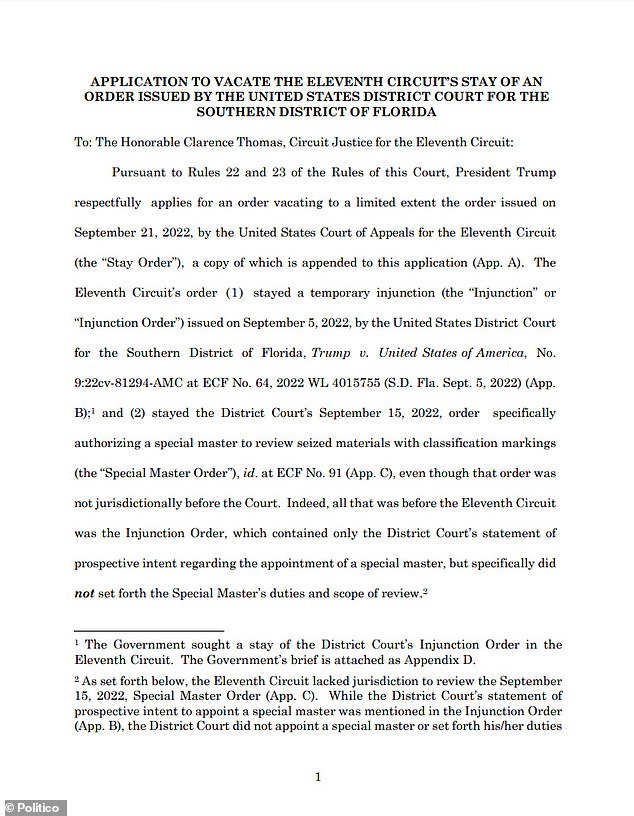 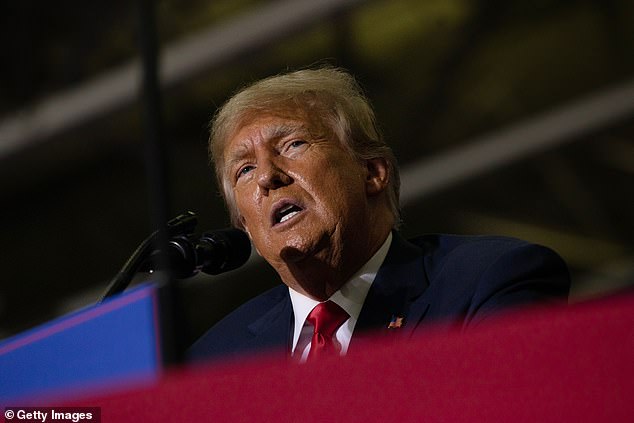 The former president has repeatedly attacked the raid, and has even suggested FBI agents may have planted material

‘This unwarranted stay should be vacated as it impairs substantially the ongoing, time-sensitive work of the Special Master,’ they wrote.

‘Moreover, any limit on the comprehensive and transparent review of materials seized in the extraordinary raid of a President’s home erodes public confidence in our system of justice.’

The 11th Circuit ‘lacked jurisdiction’ to review the Special Master Order,’ they wrote.

‘As Justice Jackson long ago recognized, the wheels of justice grind to an ignominious halt when a person—not just the political rival of the sitting administration— is targeted for “being attached to the wrong political views” or “being unpopular with the predominant or governing group,”‘ they write.

Trump’s filing to the Supreme Court was signed by four of his lawyers: Lindsey Halligan, Chris Kise, Evan Corcoran, and James Trusty. Kise is reportedly working on a $3 million advance.

Trump’s lawyers defended the original appointment of a special master by Judge Cannon, who was confirmed just weeks before Trump left office, in a move some legal experts doubted would happen.

‘The unprecedented circumstances presented by this case—an investigation of the Forty-Fifth President of the United States by the administration of his political rival and successor—compelled the District Court to acknowledge the significant need for enhanced vigilance and to order the appointment of a Special Master to ensure fairness, transparency, and maintenance of the public trust,’ they write.