CHRISTOPHER STEVENS reviews last night’s TV: Sugar-sweet Ralph And Katie is Happy Ever After for the 2020s

By Christopher Stevens for the Daily Mail

Head On: Rugby, Dementia And Me

Thursday evenings round the box in the 1970s were a time of family division and healing.

First on BBC1 came Top Of The Pops, sure to provoke much harrumphing: ‘Turn that racket down! Call that music?’ and the perennial favourite, ‘Is that a man or a woman?’ But then, at 7.40pm, we had Happy Ever After — a sitcom so soothing, it restored a smile for all ages.

Terry Scott and June Whitfield were a stereotypical suburban couple, rubbing along through all life’s niggles. He had a succession of daft ideas, she wrung her apron in frustration, but their abiding fondness for each other always won through — proof even against interfering relatives and nosy neighbours.

Ralph And Katie (BBC1), a spin-off from the Beeb’s much-loved autism drama The A-Word, is Happy Ever After for the 2020s. 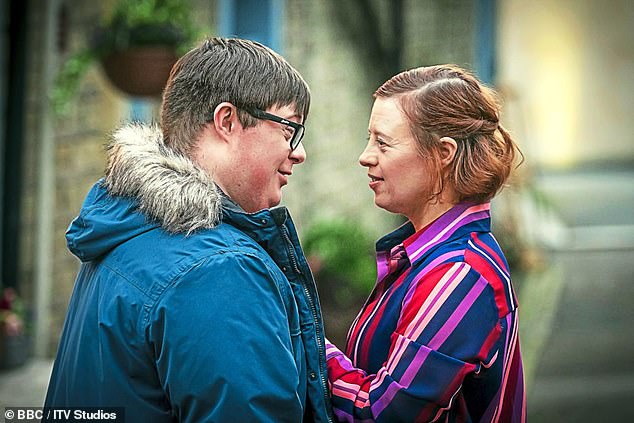 The couple, who both have Down syndrome, live in a Lake District village where the multicultural landscape is as idyllic as the countryside. Ralph (Leon Harrop) is impulsive and prone to bouts of comical self-pity. His new bride Katie (Sarah Gordy) mostly ignores his little tantrums, though she knows how to reel in his excesses when he goes too far.

The two have to present a united front when Ralph’s mum Louise (Pooky Quesnel) starts bossing them around — just as Terry and June had to manage loopy Aunt Lucy. And Craig Cash (co-writer of The Royle Family) plays lonely but well-meaning Brian next-door.

By the time Terry and June signed off in 1987, alternative comedy was booming and their homely misadventures seemed old-fashioned.

Today, with the schedules a relentless mix of gory murder and social deprivation, the sheer innocence of Ralph And Katie is a pleasure. The show airs in pairs of half-hour stories.

In the first, the young marrieds were throwing their first dinner party. An hour before the starters were served, their guests had a massive row and split up — so Gary stayed away and Emma (Jamie Marie Leary) moved into their spare room.

In the second episode, Ralph was bubbling with jealousy after opening a Valentine’s card meant for his wife. But it turned out to be a ‘gal-entine’… a card from Emma to her best mate Katie.

Only an irredeemable curmudgeon could harrumph at the endless sweetness of this show. There’s no reason for it to be on after the watershed, though. Ralph And Katie ought to air at teatime — after Top Of The Pops, perhaps.

The sweetness of England rugby star Steve Thompson’s family life is laced with sadness. Head On: Rugby, Dementia And Me (BBC2) revealed that brain injuries sustained during his sports career have not only robbed him of his memories of World Cup triumphs, but left him struggling sometimes to remember his children’s names.

Though he is only 44, the prognosis is bleak. His dementia, triggered by between 80,000 and 100,000 blows to the skull during games and training, is a progressive disease, certain to get worse.

Determined to improve playing conditions for the next generation, he tried to be elegaic rather than bitter: ‘The game that gave so much to me is starting to take everything from me,’ he said.

But he did not try to hide the cruelty of his situation. All his victories were not worth the cost: ‘I’d rather not be such a burden on the family.’

For the second evening on the trot, following Jeremy Paxman’s documentary about Parkinson’s disease, we visited Professor Steve Gentleman at Imperial College London. He explained the science behind the illness with a human brain produced from a plastic tub.

He really does have buckets of them.

Big breakfast of the week: The spa guests in Nine Perfect Strangers (C4) sat down to a morning feast of coconut, raw veg, melon and crushed nuts. Austere, but better than the lard shavings on toast that Stanley Tucci ate last Sunday in Searching For Italy.

Brittney Griner lands in Texas: Basketball star is finally back on US soil