A sex and relationship therapist has revealed the five things every couple should to ensure their romance lasts, including prioritizing sex and waiting at least one year before tying the knot.

Dr. Emily Jamea, a self-proclaimed ‘expert in love and libido’ from Houston, Texas, shared some advice on how couples can keep their love alive in a recent TikTok.

In the viral video, which racked up over 2.4 million views, Dr. Jamea described some of the key tricks to making a relationship work, while sharing the five things she would ‘never do as a relationship and sex therapist with over 15 years experience.’ 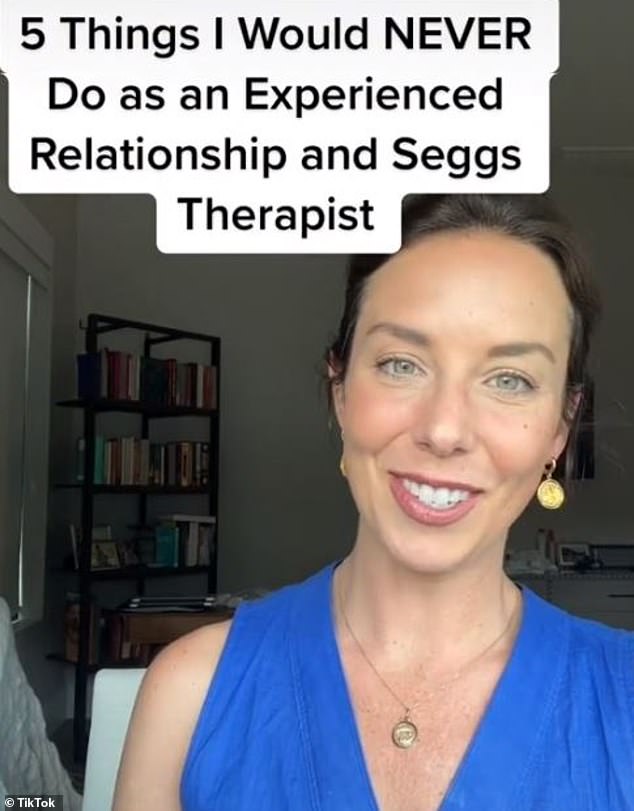 Dr. Emily Jamea, an ‘expert in love and libido’ from Houston, Texas, shared the five things all couples should keep in mind if they want their relationship to last 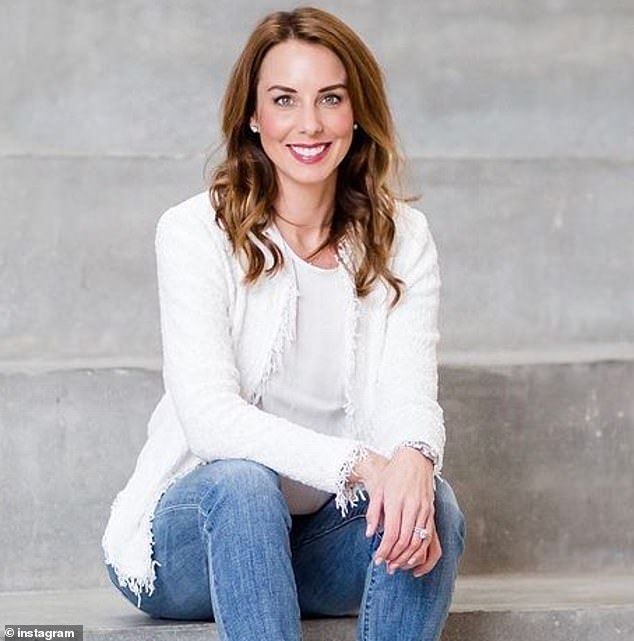 The therapist is known for sharing sex and relationship advice to her social media, revealing the surefire ways to keep the fire alive in your relationship

How do you know if they’re the one? Wait ‘at least a year’ before tying the knot

The relationship expert said all couples should wait until they truly know each other before tying the knot, so she suggested waiting ‘at least a year’ before you become husband and wife. 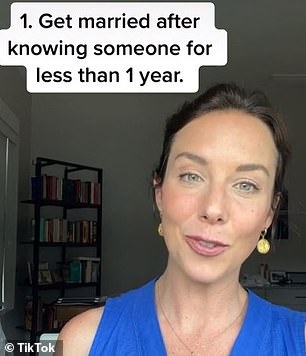 Dr. Jamea said all couples should wait till they truly know each other before tying the knot

She explained: ‘I would never get married after knowing someone less than a year.’

The sex expert added that more couples should give the ‘honeymoon phase’ time to pass.’

She continued: ‘It takes at least a full year to fully know someone.’

When it comes to finding the ‘perfect time’ to marry your partner, many couples often go off of romance and instinct, but Dr. Jamea – along with researchers at Emory University – suggested that couples take timing into account.

A study conducted by researchers at Emory University proved Dr. Jamea’s first ‘rule,’ as they found that waiting longer before tying the knot can actually increase your likelihood of staying together forever.

The study surveyed over 3,000 people who are currently married or have been married in the past about different aspects of their relationships, and it found there was a significant correlation between the how long a couple dated before marriage and how long the marriage lasted.

When compared to couples had had only been dating for one year or less, lovebirds who dated one to two years had about a 20 per cent lower chance of divorcing.

Couples who dated for three or more years decreased their likelihood of divorce by 50 per cent.

Furthermore, the study noted that knowing your partner before entering a romantic relationship were also 50 per cent less likely to get a divorce.

Out with the old and in with the new! Avoid ‘outdated’ dating rules that say you ‘can’t call first’

The relationship therapist’s second secret to keeping the romance alive with your partner is to forget ‘outdated’ dating rules – including the notion that women ‘can’t call first.’

‘One of the things I love about my husband is that he called when he said he was going to call, if you like someone its okay to show them,’ she explained. 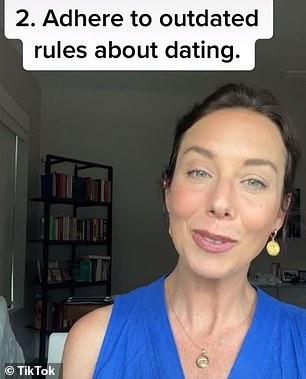 The therapist’s second secret is to forget outdated dating rules

She explained that old-fashioned dating rules, such as ‘women can’t make the first move,’ can often jeopardize relationships.

And everyone’s favorite rom-coms only reaffirm these rules – as they push for women to be the cool, chill girl who never comes off as crazy and waits for a man to come along to make the moves, such as Kate Hudson in How to Lose a Guy in Ten Days.

While these movies provide great entertainment, they don’t provide the best dating advice and have programmed many to think that if we adhere to these archaic rules, we can possibly trick our dating interest in believing we’re the one.

And just like Dr. Jamea explained, the time is long overdue for everyone to toss out the dating rule book and focus on finding out what you want through dating.

By letting go of the rules, you allow yourself to feel comfortable with dating and showing your partner you care, which will help your relationship.

Taking your partner for granted? Avoid getting complacent by going on date nights

Dr. Jamea’s third trick to a long lasting relationship was to continue building a spark by pursuing each other just like you did in the beginning of your relationship. 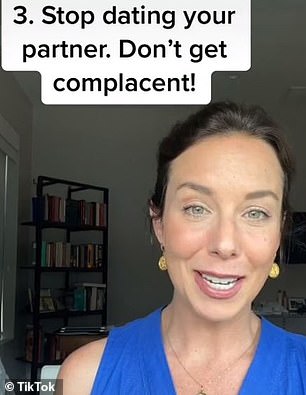 Dr. Jamea’s third trick is to continue building a spark by pursuing each other

‘You can not get lazy and complacent in your relationship, don’t schlep around in sweats all day every day,’ she explained.

She said it’s crucial to keep dating your partner no matter how long the two of you have been together because it can help keep the romance alive.

After some time together, the therapist pointed out that it’s easy to slip into a complacent routine that is slightly too comfortable.

This can cause your relationship to begin to feel mundane, after all, sharing a toothbrush isn’t the sexiest thing.

And even though you may think you know everything about you’re partner, there’s always so much more to learn about them every day.

Dating your significant other is just as important in maintaining a healthy and long lasting relationship.

Making time for weekly or bi-weekly ‘date nights’ can allow you and your partner to reconnect and have some serious quality time.

These date nights can also help you to let go of any stressors or pressures about your relationship, especially if you start to feel like its in a rut.

Continuously dating your partner will also remind you why the two of you fell in love in the fist place, give you a chance to talk about meaningful topics, and even give you something to talk about later.

Dating your partner doesn’t have to be extravagant either, as the two of you could do something simple like go out to dinner, see a movie, or even plan a fun night at home.

Focus on your partner in and out of the bedroom! How prioritizing intimacy can save your relationship 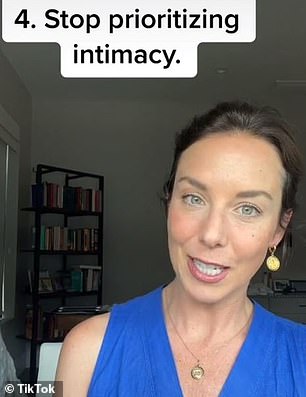 Intimacy is said to be the key to having a healthy, happy and long-lasting relationship – and the sex expert even noted it’s ‘super important to nurture’ your sex life during a relationship.

The newness of a relationship often wears off after the first few years together, and with that comes a lack of intimacy.

During your relationship, even if it’s been many years, Dr. Jamea insisted that it’s important to pay attention to your partner both in and out of the bedroom, but because of career pressures or getting stuck in a rut, couples often forget to make time to focus on their sex life.

Chris Kraft, Ph.D., director of clinical services at the Sex and Gender Clinic in the department of psychiatry at Johns Hopkins Medicine, also spoke to the significance of intimacy, calling it a ‘priority.’

‘People often think sex has to be a big production with intercourse and orgasms,’ he said.

‘When in reality, what’s most important to couples, especially to many women, is to connect and be intimate.

‘Being intimate can be as simple as talking and cuddling or affectionately touching.’

He added that partners should also focus on ‘outercourse’ like kissing and cuddling without feeling obligated to have sex.

‘The main thing is to make having an intimate connection with your partner a priority,’ he added.

‘Think about what makes you feel close and what you enjoy sexually. And then ask yourself how you can create that with your partner.’

Everybody has those days! Avoid criticizing your partner for sex issues

Dr. Jamea’s final tip for helping couples make their relationship last is to ‘never, ever’ criticize someone for a sexual issue they experienced. 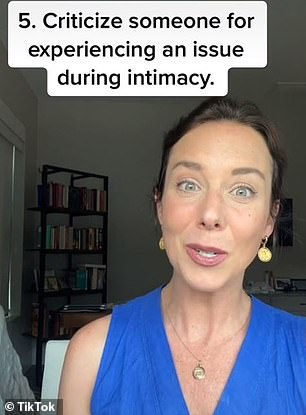 Dr. Jamea’s final tip is to ‘never ever’ criticize someone for a sexual issue

‘We all have off days sometimes and being critical can turn a little hiccup into a big issue, be kind,’ the love and libido expert said in at the end of her video.

Criticism can create great a divide, increase both stress for you and your partner, and make your partner feel overwhelmed or not good enough, especially when it comes to what happens behind closed doors.

There are many other ways to communicate that don’t involve criticism and can make your partner feel safe.

Men are often at the center of this criticism more than women because they tend to experience erectile dysfunction.

Erectile dysfunction (or ED) is the inability to maintain an erection firm enough for sexual activity.

According to Healthline, ED is extremely common and effects about a third of men.

The Massachusetts Male Aging study found that around 52 per cent of men experience ED, and that total ED increases from about five to 15 per cent between the ages of 40 and 70.

If you think you partner may need to see a medical professional, the best way to let them know is to have a discussion with them rather than criticizing them, which could make them feel insecure.

Dr. Jamea’s video caused many users to flood her comments section with words of praise for her ‘wise’ tips.

Dr. Jamea’s video caused many users to flood her comments section with words of praise for her ‘wise’ tips

‘This should go viral. She’s wise,’ said one user.  Another added: ‘I love this list and saddened at the realization that your list isn’t common sense and automatic behavior when two people are in a romantic relationship.’

‘Although these make sense to me, apparently they are not common ideas or practices for many,’ wrote someone else.

‘I totally agree with number one but people get so defensive over it,’ commented a different person.