Here we go again. After the NHS decided to bring us ‘chestfeeding’, ‘pregnant persons’ and a variety of other nonsensical euphemisms designed to erase biological women, the Local Government Association has decided to get in on the act, too.

Councils across Britain have been issued with a catalogue of banned words and their approved replacements.

For instance, out go ‘Mum and Dad’, in comes gender-neutral ‘birthing parent’. Staff are also being told not to say: ‘Good afternoon, ladies and gentlemen,’ because it might offend those who may identify as neither.

The 18-page Inclusive Language Guide, distributed to 359 English and Welsh councils, is aimed at ’embedding equality, equity, diversity and inclusion’. Yet after insisting for years that we refer to people from black and other ethnic backgrounds as BAME, that’s now gone on the proscribed list, along with the word ‘minorities’ itself.

You’re not even allowed to say ‘multicultural’ any more. The preferred term appears to be ‘global majority communities’.

What’s Welsh for You Couldn’t Make It Up?

Mark Lloyd, the LGA’s chief executive explains the new rules are essential because ‘experiences of trauma, racial trauma and exclusion are already experienced at a disproportionate rate by black, LGBTQ+ and neurodivergent people in the workplace’. 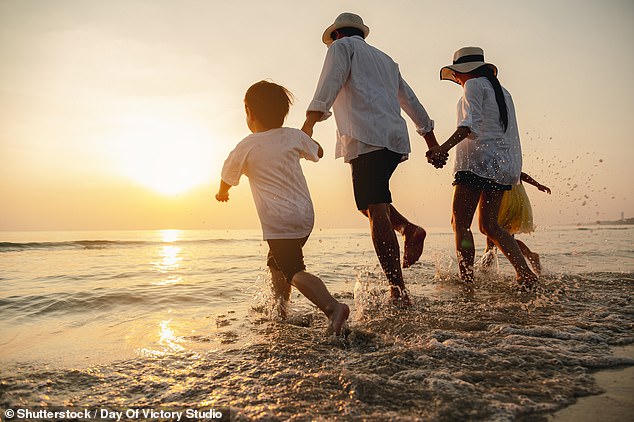 Councils across Britain have been issued with a catalogue of banned words and their approved replacements. For instance, out go ‘Mum and Dad’, in comes gender-neutral ‘birthing parent’, writes Richard Littlejohn (stock image)

Neurodivergent? That’s a new one on me. I had to look it up. It describes ‘people whose brain differences affect how theirs works. That means they have different strengths and challenges from people who brains don’t have those differences, including medical disorders, learning difficulties and other conditions’. Still, for years we’ve been told not to refer to people with disabilities, instead being encouraged to describe them as ‘differently abled’.

But having got used to that term, under the latest guidance ‘differently abled’ goes on the blacklist, too. (Can you still say ‘blacklist’?) In the Looking Glass World of local government — where like Humpty Dumpty, words mean whatever they want them to mean — you can’t even call the homeless ‘homeless’.

What are we supposed to say: people suffering from an accommodation deficit? Differently homed? I’ve read the Inclusive Language Guide, so you don’t have to. And, to be honest, most of it is written in a foreign language — a cross between Professor Stanley Unwin and Bill And Ben The Flower Pot Men, if they’d graduated from the University of Woke.

Illegal immigrant is a non-starter, obviously, long since translated as asylum-seeker. So, too, is ‘economic migrant’. The guide suggests ‘Non-UK resident’ as one alternative. Oh, and by the way, you can’t describe anyone as ‘foreign’, either. Or even ‘second generation’. Just thought I’d mention it. Can’t be too careful.

Among the other offensive words to be avoided are ‘queer’ and ‘coloured’ — except in the case of those individuals who define as ‘queer’ or refer to themselves as ‘coloured’. 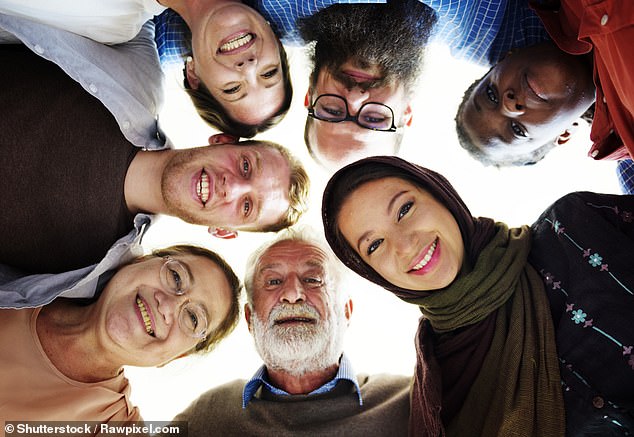 The 18-page Inclusive Language Guide, distributed to 359 English and Welsh councils, is aimed at ’embedding equality, equity, diversity and inclusion’. Yet after insisting for years that we refer to people from black and other ethnic backgrounds as BAME, that’s now gone on the proscribed list, along with the word ‘minorities’ itself (stock image)

Confused? You’re supposed to be. So while it’s perfectly acceptable for self-defining ‘queers’ to describe themselves as such, if you or I did it we could expect a dawn raid from Scotland Yard’s ‘hate crimes’ squad.

The entire public sector is in thrall to this ever-changing newspeak. It’s difficult keeping up.

For instance, in the NHS these days, you can’t say ‘disabled’. The correct expression is: ‘A person with protected characteristics under the 2010 Equality Act’. Yes, really. And even the word ‘illness’ is banned, since — and I quote from the NHS website — it ‘suggests the person could get better’. Eh? What’s that supposed to mean?

Still, with six million on the waiting list, and the chances of seeing a GP face-to-face on a par with winning the Lottery, it’s entirely possible many of those in need of urgent treatment won’t actually get better.

Perhaps the NHS should adopt a new slogan: Abandon hope all ye who enter here.

Look, it’s easy to mock. But someone’s got to do it. Perverting the language is the way the Left exercises its bogus moral superiority and controls the national discourse. This has been going on for decades, but has escalated alarmingly in recent years, as we have been told not just how to speak but how we must think.

It started out as simple politeness. We don’t talk about spastics or use the N-word any more. Nor would we want to go back to the bad old days when we did. 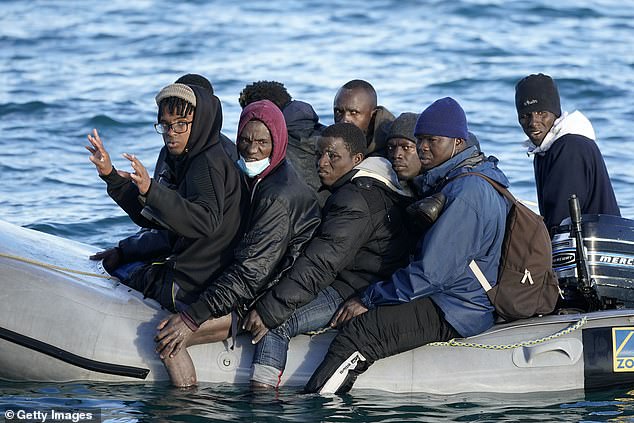 Illegal immigrant is a non-starter, obviously, long since translated as asylum-seeker. So, too, is ‘economic migrant’ (file image)

It’s worth mentioning, though, that when children who struggled at school started being described as having ‘learning difficulties’, LD soon became a term of derision in the playground. And when dwarfs became ‘Persons of Restricted Growth’, it wasn’t long before they were being mocked in some cruel quarters as ‘Porgs’.

Something which starts out with the best of motives can have unexpected and unfortunate consequences. What began as a way of protecting vulnerable minorities has morphed into a grotesque crusade again the majority — especially women, who have been reduced to mere ‘people who menstruate’ in order to appease the tiny minority of intolerant, sometimes violent, trans fanatics.

The wokerati are not content rewriting the language, they are now rewriting history and human biology, too.

You’re not even supposed to make fun of this madness any more. Not that it’s ever stopped me. When it all began, 30-odd years ago, columnists like me had a field day lampooning the latest Left-wing lunacy.

That’s when the revisionists started hunting down anything they considered politically incorrect, even bowdlerising and censoring everything from much-loved children’s stories to pantos.

I can remember one theatre group in Derbyshire being forced to change the name of a production of The Hunchback Of Notre Dame to The Bell-Ringer Of Notre Dame under pressure from disabled-rights activists.

Shortly afterwards, the great Keith Waterhouse, late of this parish, wrote a column wondering what would be next. He came up with: Noddy And Socially Challenged Ears.

These days, I’m not even sure Noddy would make the cut.

Councillors in Great Yarmouth have decided against planting an avenue of apple, pear or plum trees on the quayside because it could pose a safety hazard.

Officials had warned that the fruit could fall on the pavement, causing passers-by to step on them and slip. They also feared that ‘fruit could be used as missiles’ thrown at holidaymakers by local hooligans. I can remember Mods and Rockers clashing, Quadrophenia-style, on Yarmouth sea front in the 1960s, But they were chucking rocks, bottles and deckchairs at each other, not Granny Smith’s and Conference pears.

This is as daft as the Lib Dem councillor who wanted to chop down Torquay’s famous palm trees, in case a falling frond caught a child in the eye. ‘It’s a bit like keeping tigers,’ he said. ‘Beautiful to look at, but you don’t want them wandering the streets.’ Nurse!

What is it about elf’n’safety that sends some people bananas?

A naval engineer has been acquitted by a court martial of sexually assaulting a male colleague, because he’s ‘demisexual’.

What’s that then — someone who has sex with Demi Moore? 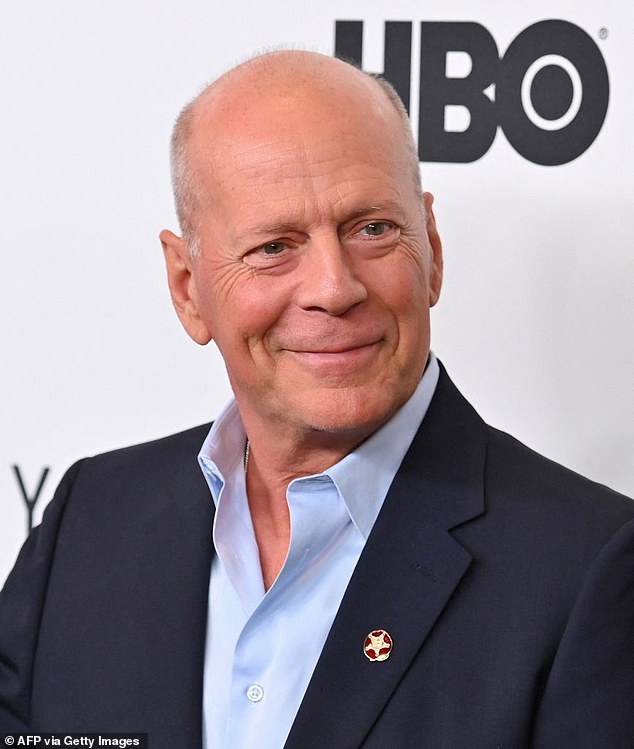 A naval engineer has been acquitted by a court martial of sexually assaulting a male colleague, because he’s ‘demisexual’. What’s that then — someone who has sex with Demi Moore?

Nonce Finder General Tom Watson has again been nominated for a peerage. The application was slipped in under the radar by Labour while the world was watching the Tories implode.

Presumably Keir Starmer approved it. Yet the odious Watson has already rightly been rejected by the Lords Appointments Commission after being put up by Jeremy Corbyn in 2021.

He abused parliamentary privilege and his position as Labour deputy leader to falsely accuse prominent Tories of murder and child abuse, acting as conduit for convicted paedophile and fantasist Carl Beech aka Nick, currently serving 18 years for fraud and perverting the course of justice. Where the hell does Watson get his sense of entitlement? And if Starmer does become PM, can we expect the NFG’s rehabilitation to include a job in government?

Watson shouldn’t be allowed within a mile of the Lords. In a just world, he’d be sharing a cell with his partner-in-crime, Beech.

Labour has promised to sabotage new Home Sec Sue Ellen Braverman’s determination to push through the Rwanda migrants plan. Does Keir Starmer know about this? After all, the team he claims to support, Arsenal, is sponsored by Visit Rwanda. And if Rwanda’s safe enough for Gooners to go on holiday, what’s wrong with sending migrants there?

Martin Lewis reveals a cheaper way of drying laundry (and it only costs 7p an hour!)