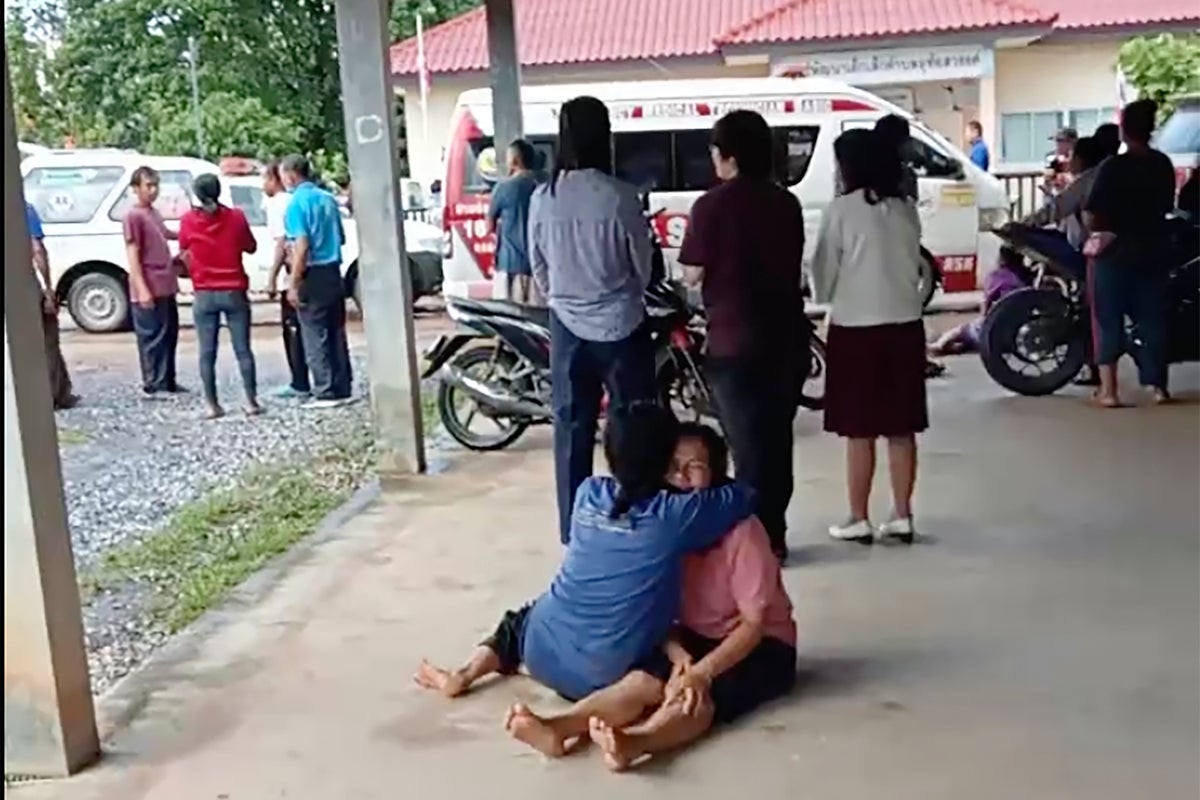 At least 35 people have been killed in a mass shooting in Thailand after a gunman opened fire in a children’s daycare centre in the town of Nongbua Lamphu on Thursday.

Police said that the victims included 24 children, with toddlers as young as two among the dead. The other 11 victims, all adults, include at least two childcare staff and one district official.

Photographs showed bodies of what appeared to be children on the floor of the centre covered in white sheets.

Police major general Achayon Kraithong said the gunman opened fire at the centre and later killed himself and his wife and children.

At least 12 people were also injured in addition to the 35 casualties. According to Thai media reports, the gunman also used knives in the attack.

Police said that the gunman, a former police officer who had been discharged last year, had been to court on a drugs charge prior to the shooting.

The prime minister’s office said he was directing all necessary resources to respond to the attack and expressed his condolences to the families of the victims.

‘Gunman shot through the door’

Witnesses in Thailand’s daycare centre shooting said that they had tried to prevent the gunman from entering but he had shot through the door.

A witness told Thailand’s Kom Chad Leuk television that they had locked the door to the building in the northeastern Thai town of Nongbua Lamphu, when they saw the suspect approaching with a handgun.

“The teacher who died, she had a child in her arms,” said the witness who did not want to be identified.

“I didn’t think he would kill children, but he shot at the door and shot right through it.”

Authorities have identified the assailant as a former police officer.

More details are emerging about how the attack unfolded, revealing that the suspected shooter, identified as Panya Khamrab, a suspended police officer, also stabbed multiple victims.

The attacker was agitated when he arrived at the facility to find his child was not there and left, then shot at bystanders and drove his vehicle at them, Paisan Luesomboon, a police spokesperson, told ThaiPBS television.

After the suspect fled, he continued to shoot from his car, hitting several people, Luesomboon told The Associated Press.

One of the first victims of the attack on the nursery school was a teacher who was eight months pregnant, according to witness accounts and officials.

Nineteen boys, three girls and two adults were killed inside the nursery building before the assailant fled, according to a police statement.

Two children and 10 adults also died outside the childcare centre, including the suspect, his wife and his son.

More pictures from the site of the shooting in Nongbua Lamphu show parents standing outside the nursery while a distraught woman sits on the floor.

Videos and photos posted on social media carried the sound of wails as frantic family members wept and watched outside the nursery school building during the attack.

Some images showed white sheets covering what appeared to be the bodies of children, lying in pools of blood at the centre.

Gun laws are strict in Thailand, where possession of an illegal firearm carries a prison sentence of up to 10 years.

Firearm ownership is high in the country compared with some others in the region.

The last worst mass shooting in the country involved a disgruntled soldier who opened fire in and around a mall in the northeastern city of Nakhon Ratchasima in 2020, killing 29 people and holding off security forces for some 16 hours before eventually being killed by them.

Images show scenes at a daycare centre in Thailand after a gunman opened fire in the town of Nongbua Lamphu on Thursday.

Gunman had been to court on drugs charge prior to shooting

Thai police said that the gunman who opened fire in a children centre’s on Thursday had been to court on a drugs charge prior to the shooting.

Paisan Luesomboon, a police spokesperson told ThaiPBS television that the attacker was agitated when he arrived at the day-care facility to find his child was not there and left, then shot at bystanders and drove his vehicle at them.

He said the attacker returned home and killed his wife and child.

Children as young as 2 among victims

Local police officials in Thailand’s northeastern province of Nong Bua Lamphu said that the victims of the mass shooting included children as young as 2 years old.

About 30 children were at the centre when the gunman arrived, fewer than usual, as heavy rain had kept many people away, district official Jidapa Boonsom, who was working in a nearby office at the time, told Reuters.

According to police in Nongbua Lamphu, the gunman who shot and stabbed 34 people in a children’s centre on Thursday was a former police officer.