By Sean Poulter, Consumer Affairs Editor For The Daily Mail and Rory Tingle For Mailonline

The rising cost of essentials such as energy and food means families are tightening their belts and cutting back on Christmas spending – including the Black Friday sales.

Electricals retailer Currys said it had already noticed customers changing their behaviour to focus more on ‘essential domestic products’ rather than luxury tech like computers and plasma screens – much of it paid on credit. 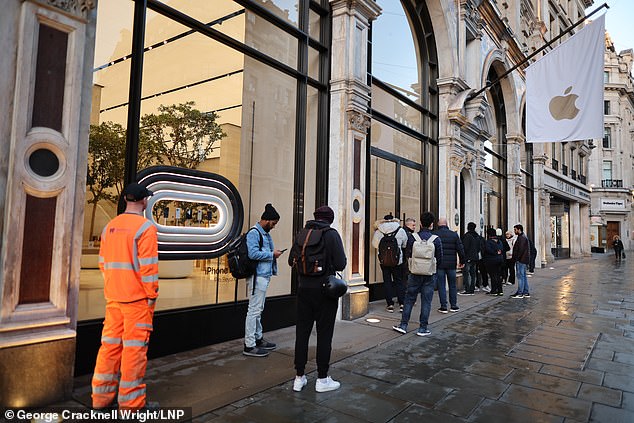 Ed Connolly, the firm’s chief commercial officer told BBC Radio 4 Today programme: ‘In electricals buying on one type of credit or other is the norm. That’s because people want to be able to spread the cost, and we offer affordable ways for people to do that.

‘More people are taking it up than this time last year. The obvious conclusion to draw is people are concerned about their own finances and are looking for ways to spread cost over a longer period of time.

‘I think when you put that together with the types of products people are buying, with energy efficient products significantly on the rise, I think you can draw from that consumers are more worried about their finances this year than last.’

Asked about the type of items people are buying, he said: ‘In Black Friday we’re seeing people prioritise essential domestic products – whereas in the past it’s been more about luxury tech. Things like microwave ovens and air fryers – which we’re selling 2,500 of per day.

‘It’s definitely the year of the air fryer. As soon as we get the stock in people are buying it, because it’s a very energy efficient way of cooking. We’re also seeing customers engage with things like heat pump tumble dryers that can save £300 on energy bills.’

Despite cost of living pressures, industry analysts at Hargreaves Lansdown predict spending across the weekend through to Cyber Monday will still be up by around 0.8 per cent on last year. They say it is likely to amount to £8.7billion because of inflation, despite a big fall in the number of purchases. 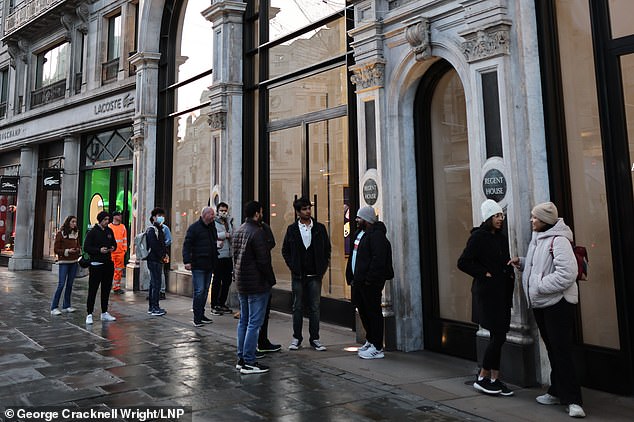 In the US, Black Friday occurs the day after Thanksgiving. The tradition has been spread to the UK by retailers looking for a big shopping day before the start of December

Senior investment and markets analyst Susannah Streeter said: ‘Retailers are desperate for some spending cheer but the worry is that it could turn out to be more of a Bleak Friday. With the promotional event taking place amid the cost of living storm, could consumers stay more cautious about splashing the cash?’

A survey by market research agency Opinium found more than three quarters plan to buy gifts in the sales this year, and 13 per cent will do so for the first time. But some of the lustre around the Black Friday event has been killed by concerns that many of the claimed deals are duds.

Research published this week by consumer watchdog Which? suggested there are very few deals specific to Black Friday. Often products are maintained at the discount price through to Christmas and the January sales.

Shoppers may also be put off spending online in the Black Friday sales because Royal Mail deliveries are being hit by strikes held by the Communication Workers Union (CWU). Members are today on the second day of a 48-hour walkout amid a long-running dispute over jobs, pay and conditions. 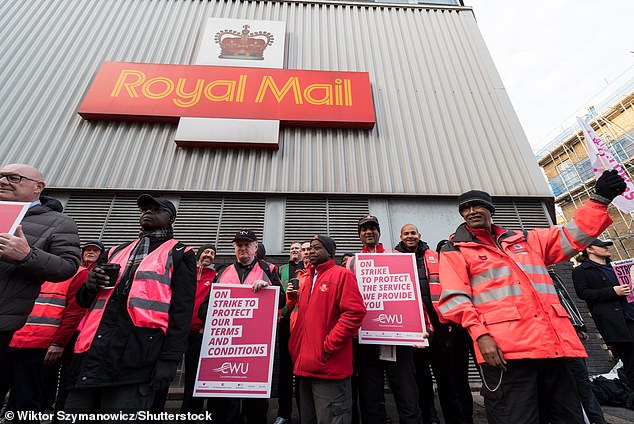 Shoppers may also be put off spending online in the Black Friday sales because Royal Mail deliveries are being hit by strikes held by the Communication Workers Union (CWU). Pictured: Striking Royal Mail workers gather on a picket line outside Camden Town delivery office on Thursday

Courier experts ParcelHero predict families will be spending £4billion less on food, gifts and entertaining than they did last year. But its head of consumer research, David Jinks, added: ‘That doesn’t mean we will all be reduced to Christmas stockings full of nuts, knitted socks and an orange.

‘There are ways to save enough money to have a decent Christmas. Leaving enough time to buy online using free or low-cost delivery options can save pounds, rather than opting for expensive next-day deliveries.’

There is also evidence that Britons are increasingly shopping for second hand products rather than buying new.